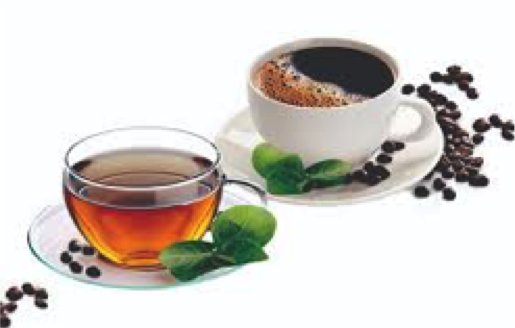 Are you a tea enthusiast or coffee connoisseur? A common debate in labs, offices, and possibly within your own home, people usually prefer one over the other to start their day. In fact, tea and coffee are the most commonly consumed non-alcoholic beverages in the world. But what leads us to choose one pick-me-up over the other, and how much of it we drink? While we may attribute our preferences to how we’re raised, recent research shows our choice of brew may also be linked to our DNA.

First, let’s consider what makes coffee and tea different. Both contain bitter compounds, although coffee contains a higher amount. However, their most noteworthy component is caffeine; coffee has roughly twice the amount found in black and green teas. Caffeine itself, though, is nearly tasteless – well, to most of us.

Researchers at the University of Queensland ran a series of experiments to determine whether people varied in their sensitivity to caffeine taste and how that sensitivity links back to our genes and our preferences. They found that sixteen percent of test participants carried a gene variant that allowed them to perceive pure caffeine with a strong bitter flavor. Despite tasting caffeine as bitter, these caffeine super tasters report drinking more coffee and less tea. Dr. Marilyn Cornelis, a nutrition and caffeine expert from Northwestern University, believes what’s happening here is a case of classical conditioning: “Individuals who can taste caffeine naturally associate that with ‘Oh gosh, alertness! Stimulation! This is going to give me my caffeine buzz so I’ll drink more.’” In essence, “caffeine super tasters” associate the bitter caffeine taste in coffee with its resulting buzz and thus consume more.

A separate molecule, known as PTC, had the opposite effect. Though PTC is not found in nature, it is similar to many of the other bitter components in tea and coffee. Unlike caffeine, participants who reported PTC as having a bitter taste drank less coffee and more tea in their day-to-day lives. Cornelis suggests this is likely because these PTC-like compounds do not have a stimulating effect — “People who are sensitive to caffeine taste equate that with the psycho-stimulant effects so consume more, but if they are sensitive to other bitter components of coffee they cut back”. Since these bitter chemicals don’t dish out helpful zing, PTC tasters tend to prefer the more mellow tea flavor.

But what about the buzz? For some, caffeine hits hard and fast so just one cup will do. Others need may require multiple hits to feel anything at all. While some of this can attributed to increased caffeine tolerance over time, there are also gene variants that control your sensitivity to the stimulant effects of caffeine. As a result, if you have low caffeine sensitivity you may not care much for coffee, particularly if you also have the “bitterness tasting” PTC gene.  Instead, you may be part of the tea crowd. Or alternatively you may drink a lot of coffee in hopes of achieving that ever elusive burst in energy.

Apart from taste and stimulant response, our ability to metabolize caffeine can also affect our drink of choice and how much of it we consume. One enzyme, referred to as CYP1A2, is principally responsible for metabolizing caffeine. CYP1A2 determines how long the caffeine buzz lasts — whether it’s only 30 minutes or half a day. The greater the activity, the faster caffeine is cycled out of your blood.  Using a genome wide association study, Cornelis found a gene variant that resulted in reduced CYP1A2 activity. People with lower CYP1A2 activity (meaning caffeine remains their bloodstream longer) and who were highly responsive to caffeine consumed coffee less often.

Black and green tea contain roughly half the amount of caffeine, and, as you might expect show a weaker, but similar pattern as coffee. You could imagine if given a choice, people with low CYP1A2 activity and a high stimulant responsiveness to caffeine may be more prone to drink tea since they wouldn’t require as much caffeine to have an impact and likely want to avoid long-lasting caffeine jitters.

Finally, through the work of Dr. Cornelis and others, modern science has allowed us to pinpoint the parts of our DNA that are at least in part responsible for our beverage preferences. But this is just the start. If we look across the globe, different regions consume tea and coffee at different rates, sometimes exclusively one over the other. While tradition and culture certainly have a major influence, could small variations in our genes across global populations contribute to these preferences? Research has largely focused on those of European descent, but expanding these studies to include other groups could help us better understand each other as this scalding debate over tea and coffee continues.