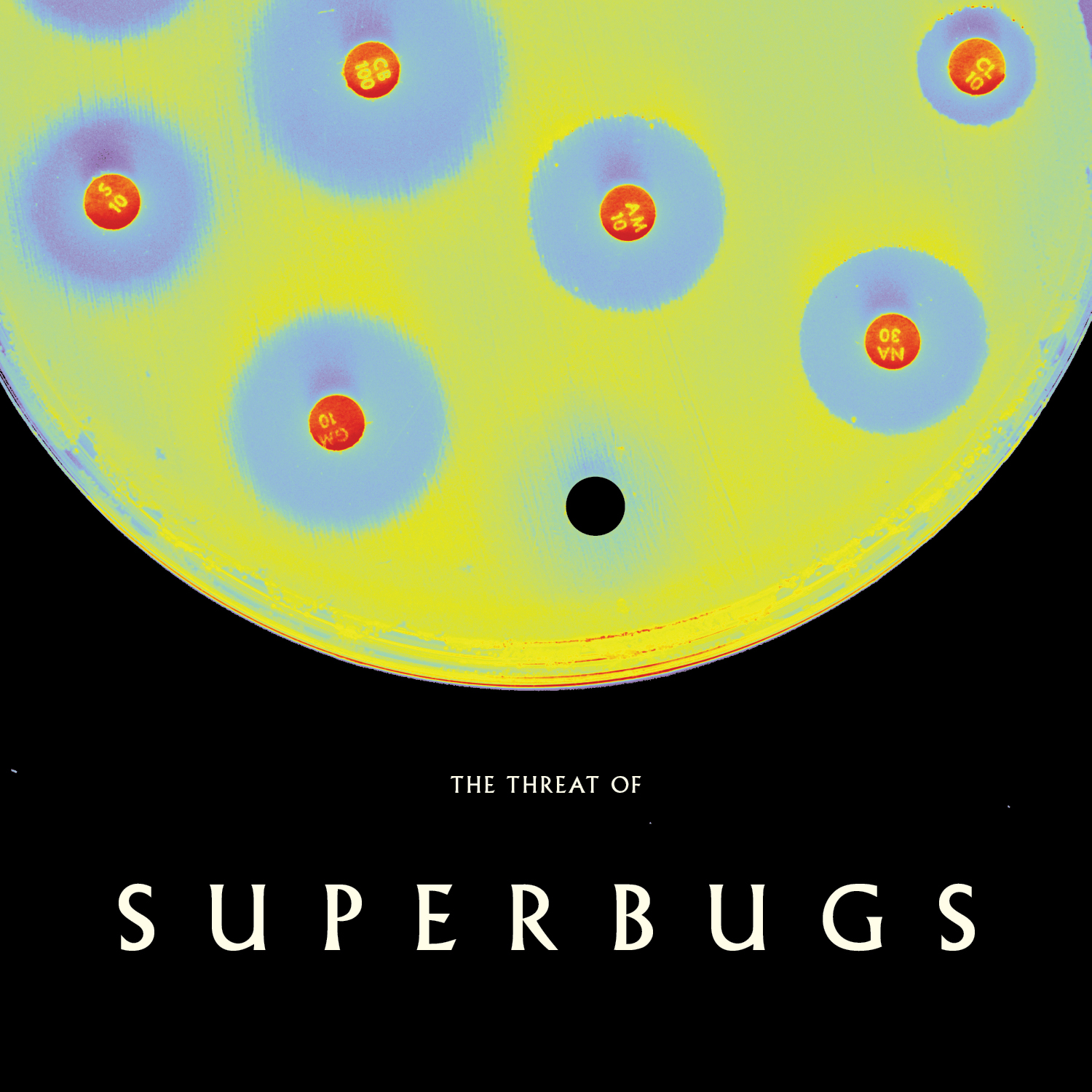 Around the turn of the 20th century, the world witnessed the birth of what they thought was an almighty cure: the antibiotic. “We became convinced overnight that nothing was beyond reach for the future. Medicine was off and running,” wrote Lewis Thomas, a physician and essayist, in his autobiography.

Nowadays, the antibiotics are met with an enemy. The threat of resistant bacteria, or superbugs. Multiplying several times an hour, bacteria are evolving resistance to our not-so-foolproof drugs, rendering our treatments ineffective. The same is true for viruses. Three of the deadliest diseases, malaria, HIV, and tuberculosis are evolving these defenses against our drugs. Locally, MRSA and other drug-resistant bacteria are cropping up.

“We tend to pay attention to these things whenever there is an outbreak and they happen to get on the news,” said Cristal Thomas, Vice President for Community Health Engagement at the University of Chicago Medical Center and Senior Advisor to the Vice President for Civic Engagement at the University of Chicago. With tens of thousands of deaths and millions of cases of drug-resistant disease each year, the world needs urgent solutions in both the societal and pharmaceutical spheres.

The Chicago Council on Science and Technology’s panel “The Threat of Superbugs” brought together local experts to spread awareness by expounding on the problem and possible solutions.

Strengthening the superbug: the origin and spread of resistance

The principle behind evolving resistance is the idea of survival of the fittest. Any bacteria that happen to have a random change in its DNA that gives it the power to thwart the drug will be fruitful and multiply. Scientists know several of the molecular techniques that bacteria evolved to do this.

Bacteria can release a compound that breaks the structure of the antibiotic, modifying the drug in a way that prevents it from working. Drugs often target the bacterial cell wall, because it’s something that differentiates them from our cells; we have cell membranes, but not a rigid cell wall. Instead of altering the antibiotic itself, bacteria can prevent the drug from breaching their cell wall. If the drug prevents the bacterium from building its cell wall, the bacteria can use molecules that the drug isn’t interfering with to build it instead. In addition to these intrinsic mechanisms that bacteria can evolve, we are facilitating their ability to become resistant and spread in several ways.

Our unwashed hands are important players, as Dr. Robert A. Weinstein, Professor of Medicine at Rush University Medical College, explained, in the spread of resistance. Hands certainly are not the full explanation, but they do provide an accessible vehicle for bacteria to transfer from one body to the next. Beyond just our hands, our movement within neighborhoods and across the world spreads bacteria even further. A map of our interactions as a social network mirrors the spread of bacteria.

A chicken treated with antibiotics may grow faster than untreated animals, but it is doing more than putting ample breasts and legs on our plates. Drug-resistant bacteria that develop on treated animals can spread to us if we aren’t careful. This spread does not occur when we consume this meat, but rather when this resistant bacteria leaches into soil water or contaminates feedlots via the air.

The more we as a society use antibiotics, the more arenas the bugs have to develop resistance. When doctors treat based on symptoms, they may give someone an antibiotic without knowing if they are infected with the specific bacteria it will treat. Better measures are cropping up, such as tests that sequence the DNA of the bug you have. Another issue is that doctors may prescribe broad-spectrum antibiotics that not only kill the targeted bacteria, but beneficial bacteria as well. Doctors may even be incorrectly treating viruses with antibiotics. These misuses of antibiotics underlie the two-fold differences in prescriptions across the country. This is not due to two-fold differences in population, but rather widespread over-prescription

Case study: tuberculosis and its cousins MDR-TB and XDR-TB

Tuberculosis (TB) is one of the top bacterial killers today. Decades ago, TB was on a downward spiral, and we could have delivered the knock-out punch then, explained Dr. Scott Franzblau, Professor in the Department of Medicinal Chemistry and Pharmacognosy at the University of Illinois at Chicago, and Director of the Institute for Tuberculosis Research.

Now we are in a much different position. Not only are we being attacked with the more traditionally-seen strain of TB, but its multi-drug resistant (MDR-TB) and extreme drug-resistant (XDR-TB) versions. XDR-TB only has a treatment success rate of 22 percent and is resistant even to the back-up, imperfect drugs that are not as effective as first-line drugs and must be given over a longer course.

TB exists mostly in humans, meaning that with the right drug cocktails, we have the ability to eradicate this disease. We don’t need to worry about animals carrying latent forms of TB and causing a resurgence. In humans, the bacteria can exist in an active or latent form, showing symptoms or just sneakily hiding out in our bodies. People with the latent form can become sick if another invader like HIV compromises their immune system.

In addition to some of the strategies other bacteria use to become resistant, TB has some unique, efficient devices. A particularly frightening example is its ability to expel drugs that have gotten inside the bacterium, by pumping them out. TB’s molecular pumps use energy to move the drugs through channels in their outer membranes. This may allow TB to become resistant to multiple drugs at once if it can pump out different drugs using one pump.

In the most ideal case, treating TB takes six months and has a success rate of 86 percent. With MDR-TB the success rate drops to about 50 percent. Each year, the world sees nine million new cases. Of these, 1.3 million result in death, despite these strains being drug-sensitive. This tiny bacterium is projected to kill 75 million of us by 2050! In the words of Professor Franzblau, “We have to put this disease away now with stronger drugs. Quickly.”

Various institutions here in the U.S. have responded to the threat of superbugs, explained Dr. Robert S. Daum, a pediatric infectious disease expert who practices at the University of Chicago. The Infectious Diseases Society of America has set a goal of 10 new drugs by 2020. Ten new targets for drugs would be even better, said Daum, emphasizing that drugs working via novel mechanisms would be best to circumvent resistance. The Center for Disease Control and Prevention is working to educate patients about the threat. To expedite research, the Antibiotic Resistance Leadership group is giving grants in this field. On a Federal level, last year President Obama signed an Executive Order instructing federal agencies to fight against drug-resistant bacteria. Hospitals have instituted stewardship programs that educate physicians, track antibiotic use, and hold leadership accountable.

These societal programs need to be coupled with new ways to defeat the bacteria on a molecular level. Dr. Michael Federle, Associate Professor at the University of Illinois at Chicago in the Department of Medicinal Chemistry, is working on such master plan.

“Even though we’re going to come up with new antibiotics…that’s not a sustainable way to go about treating bacteria,” Federle said. His work suggests that blocking signaling between bacteria could hinder their ability to organize and mount their defense. Rather than killing the bacteria, we could disarm them.

Bacteria communicate using chemicals. We can prevent this by either degrading the chemicals, or blocking their ability to sense the chemicals. If the bacteria cannot say to each other, “Time to fight,” then they will not release the compounds that destroy our cells. For example, bacteria need this communication to form biofilms, which are layers that the immune system has trouble breaking apart and destroying. They also need to talk to each other in order to share antibiotic resistance genes with each other.

Overall, this strategy could slow down the evolution of resistance. Rather than killing the bacteria, we are just weakening them. In other words, we would be putting less evolutionary pressure them to become resistant.

— Julia Turan is a science writer and C2ST volunteer. She has a degree in neurobiology from Stanford University.