NASA recently sent the James Webb Space Telescope into space. Shaped like a giant honeycomb, the Webb Telescope is one of the most advanced space observatories ever made. It will allow astronomers to see far back into the universe’s history – all the way to the infant galaxies that formed after the Big Bang.

The Webb Telescope has some incredible features, most notably its ability to detect infrared light. Telescopes that detect infrared light are extremely important in the field of astronomy because the universe is always expanding, which causes the space and light between galaxies to stretch. We cannot see distant galaxies in visible light because the stretched light becomes infrared light. Along with this, objects far away in space are concealed by dust and gasses emitted by recently formed galaxies. Infrared observations allow us to see the stars and planets that lie behind the dust.

Another important design of the Webb telescopes is the size of its mirror, which is nearly 21 feet in diameter. A bigger mirror means more light will be captured by the Webb, which is crucial to the investigation of an infinite universe. The closest galaxy to the Milky Way (our galaxy) is the Andromeda galaxy, residing 2.5 million light-years away. If we could travel at the speed of light, it would take us 2.5 million years to visit this neighboring galaxy. Considering how long it takes light to travel before it reaches us, the farther away a galaxy is, the farther back in time we can see. Webb’s large mirrors will allow us to peer back in time and see the light from the first galaxies in the universe.

The Webb Telescope is different from Hubble in a lot of ways. Webb, unlike Hubble, will not be orbiting the Earth. Instead, it will be orbiting the Sun at 1 million miles away from the Earth. Additionally, Hubble observes the universe in ultraviolet light, while Webb, as previously discussed, is primarily designed to see infrared. Webb’s distant orbit is necessary for it to observe infrared heat, but to do this, the telescope has to stay extremely cold. To block the heat from the sun, Webb has a 69.5 foot sunshield that will allow it to orbit the sun without detecting its heat. 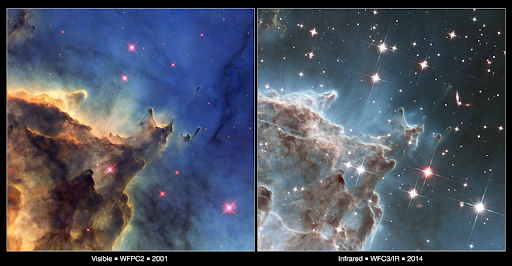 The Webb telescope will help us learn and understand the universe in new ways. Due to Webb’s extensive observational reach, we will gain greater access to information pertaining to the origin of the Milky Way, to the role that black holes play in our galaxies, and perhaps to which planets may support some version of life. Maybe most importantly, Webb will allow us to put the pieces together of what the universe was like right after the Big Bang.

The Webb Telescope was launched into space on December 25th 2021, and it reached its orbit destination on January 24th, 2022. It will be months before Webb is settled into its new home and fully operational, but as many mysteries of the universe will be revealed, the wait is worth it.