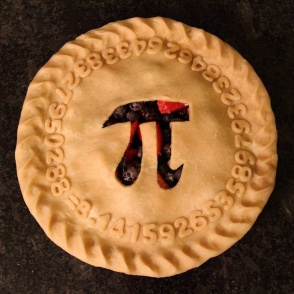 Mathematics—It’s as Easy as Pi!

Mathematics can be tasty! It’s a way of thinking, and not just about numbers. Through unexpectedly connected examples from music, juggling, and baking, Eugenia Cheng, Ph.D., will show that math can be made fun and intriguing for all, through hands-on activities, examples that everyone can relate to, and funny stories. Cheng, a mathematician, concert pianist, author and yes–baker–will present surprisingly high-level mathematics, including some advanced abstract algebra usually only seen by math majors and graduate students. There will be a distinct emphasis on edible examples. Suitable for all ages including keen children.

Eugenia Cheng, Ph.D. is Scientist In Residence at the School of the Art Institute of Chicago. She won tenure in Pure Mathematics at the University of Sheffield, UK, where she is now Honorary Fellow. She has previously taught at the universities of Cambridge, Chicago and Nice and holds a PhD in pure mathematics from the University of Cambridge. Alongside her research in Category Theory and undergraduate teaching her aim is to rid the world of “math phobia”. Her first popular math book, How to Bake Pi, was published by Basic Books in 2015 to widespread acclaim including from the New York Times, National Geographic, Scientific American, and she was interviewed around the world including on the BBC, NPR and The Late Show with Stephen Colbert. Eugenia was an early pioneer of math on YouTube and her videos have been viewed over 10 million times to date. Her next popular math book, Beyond Infinity was published in 2017 and has been shortlisted for the Royal Society Insight Investment Science Book Prize. Eugenia also writes the Everyday Math column for the Wall Street Journal, is a concert pianist, and recently completed her first mathematical art commission, for Hotel EMC2 in Chicago. She is the founder of the Liederstube, an intimate oasis for art song based in the Fine Arts Building. Her next book, Thinking Better: The Art of Logic in an Illogical World, is due out in 2018.

DETAILS: Wednesday, November 15, 2017, 6:00 p.m. Ganz Hall, Roosevelt University, 430 S. Michigan Ave., Chicago, IL, 60605. This program is FREE and open to the public. For more details, visit our website. Advanced registration encouraged on Eventbrite.
Can’t join us live? Then join us via live stream on our Facebook page at 6 p.m., or watch the program at your leisure at a later date on our YouTube channel, C2ST TV.