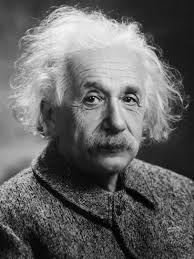 It will be the 138th anniversary of Albert Einstein’s birth on March 14.

Einstein once wrote to Freud: “[Great men] have little influence on the course of political events. It would almost appear that the very domain of human activity most crucial to the fate of nations is inescapably in the hands of wholly irresponsible political rulers.”

March is an appropriate time to look at the cultural importance of Albert Einstein.  Did Einstein contribute to the creation of the atomic bomb?  What contributions did Einstein make to peace and science and to the understanding humanity?

Because they are so profound, Einstein’s contributions to science are difficult to fathom.  Who else altered our belief that space and time were separate, measured in separate ways each having nothing to do with each other?  No, Einstein showed that space and time were inextricably linked…one’s perception and measurement of them depending on the relative motion of one observer to another.

Scientists and even the public at large know at least something about Einstein’s scientific contributions.  But, let’s look here to culture, character and society writ large.

There is a wonderful series of letters between Einstein and Sigmund Freud available on the Internet (http://www.public.asu.edu/~jmlynch/273/documents/FreudEinstein.pdf).  The letters were about human aggression, war and hopes for peace.

How can we celebrate the humanity of someone who is thought to have contributed so much to such destructive weapons?    Of course, the atomic bomb would have been inconceivable without equating energy to mass…E=MC2.  Because the speed of light (C) is so large, it means that enormous amounts of energy are released when even small amounts of matter are converted from mass to energy.  Consequently, Einstein is often credited (blamed?) with the creation of the atomic bomb. But he did not contribute in any technical or scientific way.  Einstein was a pacifist and his connection to the bomb led him to disavow his connection to it.  In 1952, he wrote [1]:

“My participation in the production of the atom bomb consisted in a single act: I signed a letter to President Roosevelt. This letter stressed the necessity of large scale experimentation to ascertain the possibility of producing an atom bomb.

“I was well aware of the dreadful danger for all mankind, if these experiments would succeed. But the probability that the Germans might work on that very problem with good chance of success prompted me to take that step. I did not see any other way out, although I always was a convinced pacifist. To kill in war time, it seems to me, is in no ways better than common murder.”

In 1931 or 1932 Einstein wrote to Freud, “I greatly admire your passion to ascertain the truth–a passion that has come to dominate all else in your thinking.”  Einstein implored Freud to use his discoveries of the unconscious to find ways to bring about world peace.  He wrote, “… it would be of the greatest service to us all were you to present the problem of world peace in the light of your most recent discoveries, for such a presentation well might blaze the trail for new and fruitful modes of action.”

But despite importuning Freud, Einstein was pessimistic about the role scientists could play.  Hence the quote I started with above.

While we use our GPS systems let’s not forget that Einstein’s equations lead immeasurably to the accuracy of navigation systems, while we use solar energy to counter global climate change, while we gaze at a blue sky without wondering about Einstein’s contributions to understanding that blue color, while our lives are made better by the implications of Einstein’s more than 300 scientific papers, let’s work together to prove Einstein wrong about one thing in particular:  let’s use science and scientists to influence the betterment of humanity.

–Sanford (Sandy) Morganstein has a MS in Astrophysics from the University of Chicago and a BS in Physics from MIT.  As an undergraduate, he was inducted into Sigma Xi, an international honorary community of scientists and engineers.  Mr. Morganstein has served in both the private and public sectors.  He has been awarded more than 35 patents including pioneering patents related to voice mail and similar voice telecommunications technology.