Ryan Lepak is a post-doctoral researcher at the National Science Foundation (NSF). He previously did mercury and food web research with the United States Geological Survey and now works for the United States Environmental Protection Agency (US EPA). His recent research focuses on measuring contaminants, specifically mercury, in the Great Lakes and observing fish populations as bioindicators of the health of the Lakes. 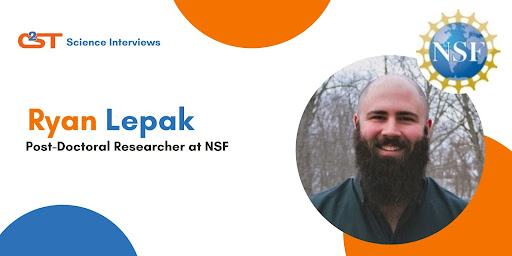 From Med School to Research Track

Lepak has studied fish in the Great Lakes since high school. In high school, he realized he was good at chemistry. He felt that chemistry gave a slight advantage to getting accepted into medical school, when compared to premed during his undergraduate program and was also afforded a safer “fallback plan” should his mind change about career paths. Undergraduate research is another excellent way to boost that resume. What he didn’t know was that undergraduate research would change his future career path.

Lepak’s chemistry background has allowed him to bring a new perspective to his field. “So I think ecosystem research and fish are obviously more inclined to [exist in the realm of] ecology and biology. Coming in with a chemist’s perspective provides you an opportunity to kind of have a unique lens,” he says. Ecotoxicology, which is a growing interdisciplinary field within environmental science, leans heavily on both biology and chemistry concepts. “[Luckily] it’s easier for me to step into a room with [eco]toxicologists and understand what they’re saying,” Lepak adds.

For Lepak, research was initially just another one of his many extracurricular activities, something to throw on his resume. He described a school field trip where he and other researchers were able to travel to various lakes (e.g. Indiana Dunes, Sleeping Bear National Park). To his surprise, Lepak enjoyed undergraduate research and decided to continue his studies within that field. “I discovered and really enjoyed doing something very different than what I had set out to do,” he said.

Communicating Science to Others

Lepak prides himself on his ability to break down complicated chemistry concepts in an effort to more easily explain to laypeople. His skills, however, did not initially come from formal experience.

Lepak originally grew up in a small farming community where the majority of residents had little scientific experience. Being one of the few, if not only, scientists in the area, it was difficult for him to articulate his research to his peers and neighbors. “All scientists are familiar with providing public presentations, but communicating with those not formally trained in science, like our friends, family, and community members, is difficult yet critically important,” he said. To practice, he explained his research projects to friends and family who were interested in his work. Their excitement helped fuel his confidence in explaining his research topics.

Part of it also just comes from making mistakes and learning from them. “We, [scientists] always think we have to be right. In some ways, society puts us on a pedestal. But if you’re not afraid to maybe make mistakes, it kind of opens some doors of comfort,” he said.

Organizations like the EPA monitor certain environments to check on the quality of water, air, and other natural resources. This monitoring is integral to keeping the public updated about the status of the Great Lakes. “At the end of the day, the consumer […] wants to know, what is the state of the Great Lakes? Are the lakes eroding? Are the lakes getting better in water quality? Worse in water quality? Warmer? Colder? You name it,” Lepak explains.

Through the monitoring of these natural resources, researchers are able to conduct studies like Lepak’s mercury investigation. Monitoring offers a baseline and a framework to observe changes in the lake. “In a retrospective standpoint, that allows us to evaluate, later on, how the lakes respond to a policy, and how [they] will next respond to it,” he says.

The monitoring also plays a huge role in ensuring the sustainability of water resources. “[There] are so many new cool tools, models, like getting all this awesome data. As we start to build this we start to understand in a new light what’s happening, and putting the data down today might serve the next decade in some way,” he said.

Lepak is currently working on a research project that he hopes will be completed next year. The kernel for the project began with simple questions like “Why is that fish or that organism highly susceptible to that contaminant? Is it because of their habitat? […] ​​Is it because their biochemical makeup is different?,” according to Lepak.

Lepak’s continued research efforts serve as a valuable reminder to young scientists that medical school is not the only option for STEM majors. The field of research is broad and exciting, allowing researchers the freedom to investigate what interests them most. Look out for new research and articles from Ryan Lepak on EurekAlert and through NSF!