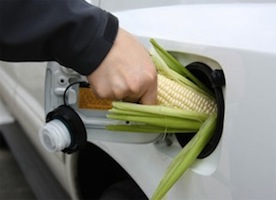 On October 13, the EPA issued a statement permitting the increase of the ethanol blend wall from 10% to 15%, instituting a new fuel in the US market, the E15 (85% gasoline, 15% ethanol mix). The fuel is only approved for cars, light-duty trucks and medium-size passenger vehicles manufactured in 2007 and later. The concern is the unknown effects on vehicles with model years prior to 2007, including engine effects, idling effects and exhaust temperatures despite insistence of industry associations to allow the fuel for cars with model years up to 2001, and even up to 1994. Further concern is that E10 leads to higher costs for consumers due to it’s lower energy density (about 33.1 MJ/L for E10 vs 34.2 MJ/L for gasoline, or 96%).

With over 95% market share, corn ethanol dominates the US ethanol market. The current blend wall of 10% means the use of about 30% of the US corn crop to produce around 13 billion gallons of ethanol this year, according the Seth Snyder, Ph.D. of the Argonne National Laboratory at the recent Future Fuels talk at IIT hosted by C2ST. However, corn conversion into ethanol consumes only the carbohydrate content of the crop, leaving the fiber and protein behind in what is called Distiller’s Grain, which is a growing and important component in US animal feed. However, the market seems to be getting close to saturation with Distiller’s Grain, partially due to “feed wall” which limits the percentage of Distiller’s Grain in overall animal feed. The US currently exports around 27% of the 33.5 million metric tons (mmt) of Distiller’s Grain, valued currently at around $4.5 billion.

The US currently has several subsidies that encourage the production of corn ethanol, the most direct one being the $0.45/gal “blender’s credit” to blend ethanol with petroleum. Next, there is the indirect subsidy, the $0.54/gal tariff on Brazilian sugarcane ethanol, both of which might be phased out by the end of the 2010 FY with the new decision to raise the blend wall. A recent CBO report stated that in terms of greenhouse gas reductions, the US tax payers would pay around $750 per ton of CO2 removed for ethanol instead of using gasoline, compared to $20 – $40 per ton of CO2 for the commercially available offset strategies.

US corn ethanol provides thousands of domestic energy industry jobs, and diversifies the market for corn and satisfies a part of the US demand for transportation fuels which currently sits at around 8 million barrels a day (336 million gallons a day, or roughly 1.1 gal/person&day in the US), there are limits to this potential – an E15 blend would use 45% of the entire crop of corn in the US. The US ethanol industry has experienced tremendous growth, from 1 billion gallons a year in 2001 to 13 billion gallons a year in 2010. The maximum potential blend wall, even if all vehicles could be retrofitted to use it is less than 30% (that includes 100% of US corn today, and it is lower due to lower energy density of ethanol). Which still leaves 70% of our fuel in petroleum, thus not solving the issues of energy independence, carbon emissions and fossil fuel dependence. There are are other biofuels and alternative fuels on the horizon, but until they are developed we are still dependent on mostly foreign crude oil.