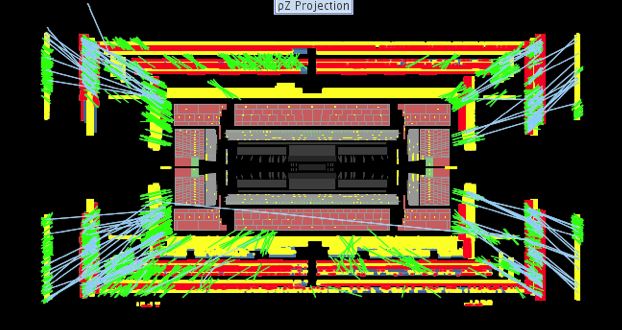 On Easter Sunday beam began to circulate again in CERN’s Large Hadron Collider.  The world’s highest energy particle accelerator resumed operation after a two year shutdown to modify its magnets so it can collide protons at twice the former energy.  At half the energy, LHC “Run 1” discovered the Higgs boson; now scientists are excited to have a more powerful instrument to learn more about the Higgs boson and possibly see evidence of the Dark Matter in the universe (if it is due to a particle that can be produced in LHC proton collisions, of course).

The turning-on of the LHC is proceeding in carefully controlled steps to ensure the complex machine is behaving as intended.  There is good reason for this caution: at full energy and intensity, the LHC proton beam carries the same energy as an Airbus 380 in flight!  For the next week beams of protons will be permitted to orbit the 27 kilometer LHC racetrack at low energy so that precise orbit control measurements can be taken. Every so often part of the intense beam is allowed to smash into material near the detectors used to make the physics measurements. An example of this is shown in the picture. We call these “splash events” for obvious reasons. They are a useful tool for making sure the detector components are all live and functional.

By late April we hope to be recording the first collisions of protons at full energy and the search for new particles will begin.  The Chicago area hosts a large number of scientists working on the LHC machine or its experiments. Fermilab, Argonne, U Chicago, UI Chicago, UI Champagne, Northwestern, and NIU have large groups involved in the LHC experiments.

—Dr. Mark Oreglia is a Professor of Physics at the University of Chicago. He was a panelist on C2ST’s program, “Science + Cinema: New Screen Frontiers,” for his work on the film, “The Believers.”