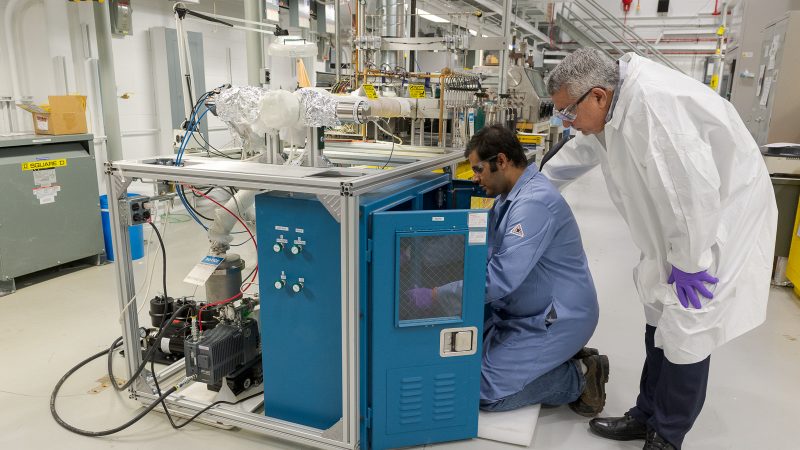 Inside an operating nuclear reactor, the environment is extreme, as reactor components are exposed to a combination of intense radiation and heat as well as chemically reactive coolant. That’s why, in order to operate reactors safely, scientists need to design their components with materials that can withstand these conditions.

Researchers at the U.S. Department of Energy’s (DOE) Argonne National Laboratory have made a pivotal discovery by taking a technique originally developed for the semiconductor industry and using it as a way to coat nuclear materials. This technique, called atomic layer deposition (ALD), forms the basis of new methods to protect nuclear fuels and materials from direct exposure to the reactor’s hostile environment.

“We are pioneering the use of ALD for nuclear applications,” Argonne nuclear engineer Abdellatif Yacout.

Atomic layer deposition ― like its name suggests ― allows researchers to deposit atomically thin films of a particular material on a surface. By building up these layers, Argonne scientists can form chemically precise coatings designed to have a set of particular properties.

“We are pioneering the use of ALD for nuclear applications,” said Argonne nuclear engineer Abdellatif Yacout, manager of the fuel development and qualification group. Argonne experts in the technique, led by Argonne Distinguished Fellow Michael Pellin, were instrumental in those advancements.

In one set of experiments, Argonne scientists have used ALD to deposit zirconium nitride (ZrN) as a coating directly over low-enriched uranium-molybdenum (U-Mo) powders. The coating is thin enough to allow neutrons to penetrate through, while shielding the fuel from degradation, generally from interaction with aluminum (Al), a major constituent of a research reactor fuel systems.

That specific work to redesign coatings for nuclear fuels supports the effort to convert high-power research reactors around the world that use high-enriched uranium (HEU) to use low-enriched uranium (LEU) fuels, in support of the national policy of HEU minimization.

Coating claddings to hold up to reactor environments

Two other sets of experiments involving ALD revolve around claddings, which are structural materials that encapsulate the fuel constituents inside of a nuclear reactor.

High fretting resistance from a nano-laminate coating. This project used ALD to design cladding materials that would resist fretting wear, a behavior in reactor assemblies that contributes to mechanical wear. ​“A way to resist fretting is to coat the surface of the cladding to increase its hardness,” Yacout said. ​“Cladding surfaces modified with an ALD coating (for example, aluminum oxide [Al2O3]) and followed by other treatments, increases the surface hardness by almost 100-fold.

High temperature oxidation resistance. This project revolved around developing coating for claddings such that they can better withstand the high temperatures inside a reactor during severe accident conditions. The team developed a unique ceramic composite material, which can be fabricated at low temperature but with a significantly compact microstructure.

Developing this ceramic-based composite coating is a two-step process. It involves combining electrophoretic deposition (EPD), a fast and low-temperature deposition method, with ALD. In this way, the Argonne researchers were able to quickly create a thick ceramic-ceramic composite coating that both adheres and conforms to the cladding surface.

The power of a joint technique

Neither EPD nor ALD as a deposition process by itself would have yielded a coating sufficient to protect the cladding, said Argonne researcher Sumit Bhattacharya. ​“Even though ALD generates a pinhole-free, dense and adherent coating, the deposition rate is relatively slow. In order to deposit the thickness you need, it will take days or even in some cases weeks,” he said.

“Meanwhile, if you only use EPD, the deposited layer is highly porous, and requires high-temperature sintering to become dense and adherent to the substrate. This is not ideal, as the cladding material is temperature-sensitive and it will lose all of its mechanical properties.”

One principal advantage of using the dual deposition techniques consists in the ability to greatly reduce the temperature needed to produce an adherent coating. Generally, to develop a dense ceramic composite, a high-temperature sintering step is necessary. However, because the cladding is made of metal, the typical sintering would cause the substrate to melt or lose its strength.

“Not only will you not achieve sintering, but the main substrate that you are trying to protect will be destroyed,” Bhattacharya explained.

The combination of the EPD/ALD technique achieves an adherent coating at a temperature of only around 300 degrees Celsius, far lower than the conventional sintering temperature required for such composites.

Using ALD offers another essential benefit over other deposition techniques, such as chemical vapor deposition (CVD). Even though CVD deposits more quickly than ALD, in doing so it blocks parts of the channels that would need to be filled. As a result, it leaves behind large porosities inside the composite. ​“Only ALD can make sure that we are able to treat all the nooks and crannies,” Bhattacharya said.

In order to test how the coating can endure the reactor irradiation environment, the researchers bombarded it with heavy ions at various temperatures in Argonne’s Intermediate Voltage Electron Microscope facility (IVEM). Afterward, the sample stayed intact and scientists found no apparent changes in the nanopowder and the overlaying ALD coating.

Established by Congress in 2000, the National Nuclear Security Administration is a semi-autonomous agency within the U.S. Department of Energy responsible for enhancing national security through the military application of nuclear science.  NNSA maintains and enhances the safety, security, and effectiveness of the U.S. nuclear weapons stockpile without nuclear explosive testing; works to reduce the global danger from weapons of mass destruction; provides the U.S. Navy with safe and effective nuclear propulsion; and responds to nuclear and radiological emergencies in the U.S. and abroad. Learn more at https://​ener​gy​.gov/nnsa.

Argonne National Laboratory seeks solutions to pressing national problems in science and technology. The nation’s first national laboratory, Argonne conducts leading-edge basic and applied scientific research in virtually every scientific discipline. Argonne researchers work closely with researchers from hundreds of companies, universities, and federal, state and municipal agencies to help them solve their specific problems, advance America’s scientific leadership and prepare the nation for a better future. With employees from more than 60 nations, Argonne is managed by UChicago Argonne, LLC for the U.S. Department of Energy’s Office of Science.

The U.S. Department of Energy’s Office of Science is the single largest supporter of basic research in the physical sciences in the United States and is working to address some of the most pressing challenges of our time. For more information, visit https://​ener​gy​.gov/​s​c​ience.