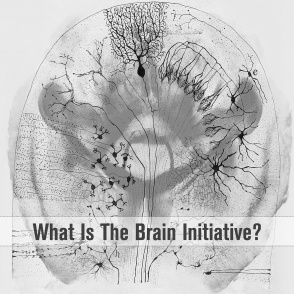 BRAIN. No longer just a word to describe the three-pound hunk inside your skull. As of April 2013, “BRAIN” is also a White House initiative- Brain Research through Advancing Innovative Neurotechnologies. What exactly are researchers hoping to discover and how are they going about this? Chicago Council on Science and Technology hosted a panel discussion on the BRAIN Initiative this fall, and in it they set out to tackle these questions, and consider the current landscape of neuroscience research.

One hundred thousand miles of cellular cables and one hundred trillion cellular connections are crammed into our noggins. In the early 1990s, the Albert Einstein of brains, a gentleman by the name of Santiago Ramon y Cajal discovered three fundamental laws of the brain. Our brains are made up of individual cells, not one big interconnected mass. Brain cells are asymmetrical, with a branching tree-like formation on one side, and a long cable on the other. And information passes from the long cable of one cell to the tree-like formation of the next.

Remarkably, in the century since Ramon y Cajal, our idea of how neurons connect with each other has not changed significantly. This is despite the fact that is probably wrong. The stain Ramon y Cajal used to determine these principles only marks a measly one percent of cells. The other 99 percent are beyond what we can see with a type of microscope called the light microscope. To fit a trillion synapses into the brain, each structure has to be incredibly small, smaller than a wavelength of light it turns out –hence, light microscopy doesn’t allows us to see all the details of a brain

Every small part of this structure has a different organization and a different group of cells. For most of them we really have no clear statement about what those structures are doing. The cellular mechanisms of the contacts between cells are also immensely complicated. We have some understanding of the computations between them. At the level of cognition, we are lost.

“And this is the state of affairs with the brain,” says Dr. John Maunsell, Professor of Neurobiology at the University of Chicago

“Now we’re in a position now where we can ask questions about function and dynamics, how the actual operations occur, how the brain does its job,” explains Maunsell.

Cells that look identical might in fact be doing different jobs.

Although we can are blessed with give senses, when we study the brain, we almost predominantly only use only one: our eyes. Part of the BRAIN initiative is trying to provide new ways of looking at the brain.

As Yogi Berra said, “You can observe a lot just by watching.”

Dr. Bobby Kasthuri, Neuroscience Researcher at Argonne National Labs and an Assistant Professor in the Department of Neurobiology at the University of Chicago, uses electron microscopy (EM), which uses high-resolution images to map the brain. Using thin 2D slices of the brain visualized with EM, we can reconstruct 3D versions of neurons by marking them in each of the slices. Ultimately Kasthuri hopes to do this in the billions of neurons in the brain, but he has started with a small piece of mouse brain, smaller than a grain of sand, and marked all the elements. It turns out that the brain is not how Cajal had imagined and not how we had thought about them for over 110 years. It is jam-packed with cellular cables that extend over very large distances and make connections with each other.

“Using this data, what I’m interested in is answering fundamental questions about brains that people ask me all the time. How many neurons are there in a brain? Well the answer is we don’t know,” explains Kasthuri.

Without answering these basic questions, it’s next to impossible to get at the sophisticated ones we might be more interested in.

How much data does it take to create these maps? The human brain would take a whopping 1.3 billion terabytes, half of all the hard drives that exist today.

“So if I could just get all of that, then I could easily map this human brain,” quips Kasthuri.

In parallel with understanding the normal functioning of the brain, research tries to uncover how it malfunctions.  Mental illness affects our thinking, our mood, and ability to relate to each other. It accounts for 37 percent of all the years lost to non-infectious diseases.

Drug development for the central nervous system, the brain and spinal cord, is particularly disheartening with nearly double the failure rate of all other drugs. The sobering reality is that many of these drugs were discovered serendipitously, rather than following a thorough understanding of structure and function.

We do not understand neuropsychiatric diseases well. Diagnostic criteria are variable, often using subjective measures. These are not singular diseases, with varying types, presentation and disease course.

This is another arena, which the BRAIN Initiative hopes to elucidate.

Arguably, more than understanding a vital organ, will tell us about what it means to be human. While we may have a clear idea of aims and directions for research, the endpoint is hazy.

“We don’t know how far away that is. It’s possible that all the concepts and understanding will come tumbling out over the next 5-10 years and we’ll know how the brain works, but we really could be facing a much longer period than that before we come to a complete understanding,” explains Maunsell.

Julia Turan triturated, pipetted, imaged, and analyzed, during her undergrad years studying neurobiology. Since then, she has shifted into the world of science communications, hoping to promote a language of science legible to all. Julia is currently completing an MSc in Science Communication and Public Engagement at the University of Edinburgh. Follow this link to subscribe to her weekly newsletter of five worthwhile science stories: http://tinyletter.com/juliaturan. Or follow her @JuliaTuran.