Vampire bats are mysterious creatures that have quite a reputation due to their unique diet. They are the only mammals that have a diet of blood, blood, and… you guessed it, blood! 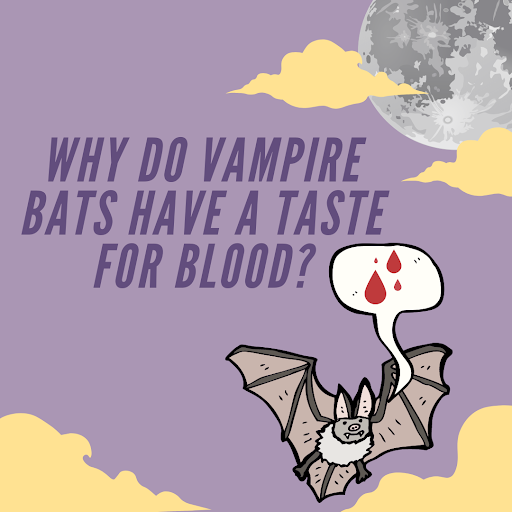 Blood is essentially liquid life. Our bodies depend on it to fuel our cells and keep us alive. While our blood does technically keep us alive, drinking it is widely considered a bad move because blood is such a poor source of nutrients (amongst other…cultural reasons).

There are over 1,400 bat species and many of them prefer to eat fruit, nectar, pollen, insects, and even meat. However, there are three vampire bat species that dine on blood: the common vampire bat (Desmodus rotundus), the hairy-legged vampire bat (Diphylla ecaudata), and the white-winged vampire bat (Diaemus youngi). But how did these bats develop a taste for blood, let alone stomach it?

Physiologically, bats are well equipped to support their all-blood diet. They have heat-seeking noses¹ that detect warm spots on the skin where blood is flowing. Once located, they have razor-sharp teeth to pierce the skin and draw blood. Their saliva has proteins that act as painkillers, so their victims do not realize they have been bitten. Additionally, their saliva is full of anticoagulants which help to keep the blood from clotting as they feed.

However, there are many reasons why blood is a poor food choice. For one, blood is roughly 80% liquid and has extremely low caloric value. To get their fill of blood, vampire bats need to “bite off more than they can chew”, by drinking roughly half of their body weight in blood. Bats must feed frequently–if they don’t then they need to rely on their bat friends to share a blood meal². This kind of diet is highly unusual because, although blood is rich in iron and protein, it lacks sugar and vitamins. Studies have shown that there are bacteria in the vampire bat’s gut³ that help them synthesize vitamins that do not come from their diet and also work to break down proteins.

Blood drinking is thirsty work! But how do bats manage to sustain themselves solely on this dubious diet?

Compared to their numerous bat counterparts, scientists believe that vampire bats made the shift toward this diet millions of years ago. Vampire bats are thought to have transitioned from eating insects to eating blood by consuming blood-filled insects like mosquitoes.

Blood is not known to taste delicious, but rather, metallic and bitter. Normally, we will turn our noses up at bitter foods because being able to detect bitterness from potentially harmful or poisonous compounds keeps us safe. But because bats’ diet only consists of blood, it is unlikely that blood would contain toxic compounds. As a result, bats have become less reliant on bitter taste receptors.

Scientists have previously discovered that the loss of three genes responsible for sweet and bitter taste receptors has caused bats to have a diminished sense of taste⁵. However, despite their blood diet, bats most likely do not enjoy bitter tastes since they can still detect when bitter compounds are added to blood⁶ and refrain from drinking it to avoid indigestion.

However, you can have too much of a good thing. Blood is high in iron and large amounts can disrupt the digestive tract and liver, causing iron poisoning. Iron is absorbed from the bloodstream into the cells of the intestine. Then, these iron-filled cells are shed and excreted from the body in a few days’ time. Surprisingly, vampire bats consume 800 times more iron than humans!

Another gene these bats lost along the way is related to iron uptake in intestinal cells. Because they do not have this gene, vampire bats can front-load more iron into their intestinal cells to be excreted from the body. This process likely helps regulate their iron levels safely.

Other genes that vampire bats have lost are related to insulin, gastric acid production, and protein digestion. Insulin is produced to control our sugar (glucose) levels in the body, but because blood has a low sugar content, this gene has lost its use. Similarly, gastric acid is produced in the stomach to help break down solid food. Since vampire bats have an all-liquid diet, they have no use for this gene. On the other hand, blood is rich in proteins. Vampire bats lack a gene involved in inhibiting trypsin, an enzyme that works in protein breakdown and absorption. Thus, bats have higher levels of trypsin to help them digest their protein-rich diet.

Compared to their numerous bat counterparts, scientists believe that vampire bats made the shift toward this diet millions of years ago. Vampire bats are thought to have transitioned from eating insects to blood by eating blood-filled insects like mosquitoes. An all-blood diet certainly comes with its own challenges, but the loss of certain genes serves as an evolutionary advantage for these bats. For vampire bats, it seems like less is more and they have perfected the technique of blood-sucking.