The animal kingdom can be cut-throat, as friendship is not found in all animal species generally speaking. Animals of the same species can have acquaintances and animals of different species have also been observed to form bonds. But is this friendship? For a long time, scientists shied away from even using the term “friendship” in the context of animal bonds. It was believed that animals mainly had short-term, goal-oriented relations to satisfy their current needs (e.g., access to food or mates). This is similar to a business transaction, and begs the question, “Is there a benefit to investing time and energy into making friends?” In short, the answer is yes!

Humans are not the only animals capable of forming lasting friendships. There is increasing evidence of animal friendships among the same species and even between different species. For instance, lasting friendships have been observed in several animals, including elephants¹, dolphins, hyenas, chimpanzees², and even bats. These animals are known to be highly social and interact within a dynamic social structure. Among these animals, bats are a surprising addition to the list because brain size is believed to play a role in the formation of friendship. Larger and more complex brains (e.g., elephants) were thought to enable animals to develop and maintain friendships; however, this is not the case. 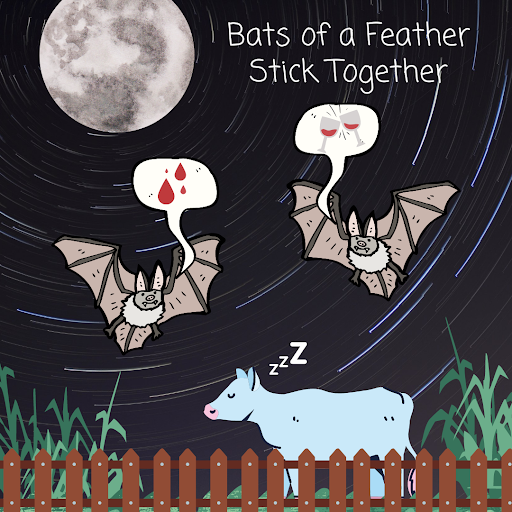 Recent studies have shed some light (no pun intended) on vampire bats and their after-dark social lives. In one study³, vampire bats were fitted with tiny “bat backpack” sensors to monitor their interactions with other bats who either lived in the wild or in human care. Vampire bats who formed bonds while in human care continued their friendship after being released back into the wild. Grooming each other, roosting near their friends, and sharing a blood meal are ways that vampire bats deepen their bonds with one another. Vampire bats and their ‘friends’ would meet up on a cow during their nightly foraging. This social foraging⁴ allows bats to break bread—or rather, blood—together.

Making friends in the animal kingdom parallels how human friendships occur⁵, as much of it is based on motivation. We have seen instances of this in animals with social hierarchies (e.g., chimpanzees). It all depends on who you know and how their social status can help or hurt you. But animal friendships can go beyond strategic means, as seen in our tiny, bloodthirsty pals. It starts with social grooming and roosting near each other. This bond slowly develops into sharing a meal together during foraging. Naturally, bats would be inclined to behave this way with their relatives. However, having a larger social network is more advantageous. Friendships are valuable and provide clear benefits to one’s health (longer life), survival (protection against predators), and reproductive success. Much like our own friendships, lasting animal friendships are built upon bonding through actions that foster support and cooperation. With more emerging studies, we hope to continue unraveling the complexities of the science of friendship in the animal kingdom.

4 thoughts on “Bats of a Feather Stick Together”