When we develop new technologies, we rely on our knowledge of physics, chemistry, biology, and math to produce the best outcomes. Sometimes, it’s easier to take ideas from the world around us instead of having to “reinvent the wheel.” Biomimicry is when we model materials, structures, or systems based on biological processes and entities.

One of the best known examples of biomimicry is velcro(1). In 1941 George de Mestral noticed that burrs were sticking to him and his dog as they walked. When he looked at the burrs under a microscope, he saw they were made of hundreds of tiny hook shapes. These tiny hooks inspired the creation of velcro. 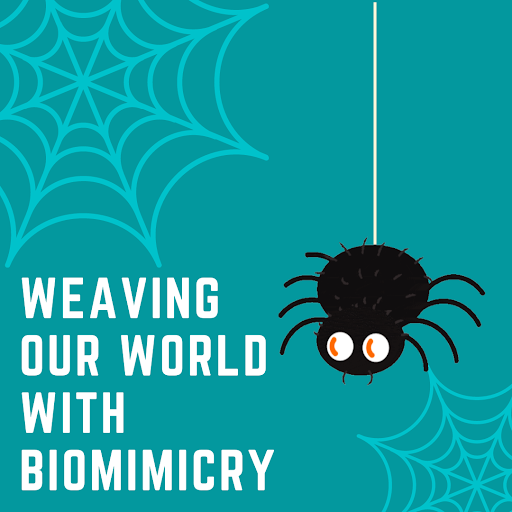 Spiderwebs in particular have a lot of biomimicry potential. The webs are extremely resilient so their physical structure is used as inspiration for the manufacture of certain kinds of glass. This glass forms a spider web-like shape at the point of impact, spreading the force of impact so that it shatters but doesn’t fall apart.

Spiderwebs are also UV reflective– this prevents birds from flying into the webs and destroying them. The reflective aspect of spiderwebs has been used to design glass for skyscrapers(2), and has significantly reduced the amount of birds dying by flying into windows.

A more recent discovery is that spiderwebs repel microbes(3). What’s fascinating about this discovery is the mode of repellent–unlike insect repellants, which rely on chemicals to keep bugs away, this repellent relies on the physical structure of the webs. Spider webs are made of up combinations of amino acids. Each amino acid has a positive or negative charge, which, in different combinations, alters the structure of the combined amino acids. In spider silk, these amino acid combinations create areas of positive and negative charge, making the web hydrophobic (or water repellent), which prevents the sticking of microorganisms.

What sort of inventions or technologies will this discovery inspire?

One challenge hospitals currently have is eliminating biofilms. Biofilms are layers of microbes on materials and surfaces that should be sterile (surgery surfaces, medical implants, and catheters, for example). These microbes can lead to life-threatening infections. Oftentimes, processes to clean these surfaces involve chemical solutions, which can damage or kill human cells. Mimicking the structure of spiderwebs on these surfaces would provide an optimal solution: physically preventing the attachment of bacteria while allowing human cells to thrive.

Recently, a research team in Germany engineered 2D and 3D spider web-based structures to test cellular and microbial growth. They found that their engineered spiderweb structures significantly reduced growth of E. coli and P. pastoris while allowing mammalian cells to grow. They also found that scientists can alter the structures of webs to selectively inhibit/allow specific microbe growth, which may have many applications in research.

Overall, it seems like biomimicry has enormous potential in numerous aspects of life… maybe copying isn’t so bad after all.