Imagine waking up every morning and having a device that greets you with a report on the quality of your sleep, a summary of your key health indicators, and a schedule of suggested exercises for the day tailored to your age, health and personal goals. Although a device with features like this might sound like science fiction, Professor John A. Rogers and his research team at Northwestern University are working to make this vision a reality.

Who Is John A. Rogers?

Dr. John A. Rogers is Professor of Materials Science and Engineering, Biomedical Engineering, and Neurological Surgery at Northwestern University. He is a leading materials science researcher creating “flexible organic electronics” that can be applied to the skin or implanted inside the human body. Some of these electronic devices will provide a steady stream of health information to patients and their doctors. Other devices will administer electrical therapy to injured parts of the body, for example, to stimulate repair of damaged nerves in spinal cords.

Rogers grew up in a science-focused family. His father has a Ph.D. in physics, and his mother is a poet whose poetry explores science and nature. As a sophomore in high school, his interest in chemistry was piqued by a homework assignment requiring students to write a one-page summary on each of the elements of the periodic table. Rogers was fascinated by the fact that elements having such different characteristics were all composed of the same three fundamental building blocks: protons, neutrons and electrons. All that varied were the number and configuration of these building blocks in each element. Rogers’s work today focuses on how the number and configuration of atoms and molecules affect the properties of materials whether the materials can be effectively and safely applied to, or implanted inside, the human body.

Where It All Started

Rogers started his research developing carbon-based (organic) semiconductors for communications devices. He changed direction to develop flexible electronics for health applications as a result of a chance meeting. While working on flexible electronics for military applications at UIUC, Rogers received an invitation to speak at The University of Pennsylvania’s (UPenn) Department of Electrical Engineering. After the talk, neuroscientists from the medical school of UPenn approached Rogers and asked him whether he ever thought of using flexible electronics in the brain. That conversation opened a whole new horizon of application opportunities for Rogers, who says, ”whatever I was working on up to that moment felt less compelling compared to taking these technologies and deploying [them in the] human body to improve insights into living systems and advance medical technology.”

Silicon is found in nature in a compound consisting of silicon and oxygen called silicon dioxide or silica. Silica is a component of sand and rocks. Silicon can be separated from oxygen and in purified form is used to manufacture semi-conductors for electrical devices such as computers. The last thing most people would think of looking at sand and rocks and semiconductors mounted on stiff circuit boards are electrical devices that can bend, conduct electricity and be safely applied to skin or implanted in the human body. But John Rogers, thankfully, had different ideas.

Rogers experimented with different amounts and geometries of silicon compounds. He discovered that very thin silicon compounds (only a few atoms thick) could be fabricated and that they could bend while still conducting electricity. He also learned that in certain thin configurations, the silicon-based material could be implanted in the human body and over time would safely dissolve and be eliminated. Similar to what he had learned from his high school assignment involving the periodic table, the properties of materials depended upon the number and geometric arrangement of their building blocks.

Sensors At Work: From UV Exposure To “Sweat Art”

In November 2018, Rogers rolled out a device that can be applied to a fingernail, detects the amount of UV radiation a person has absorbed during the day and wirelessly transmits that information to the user’s cell phone. This information can help prevent sunburn and skin cancer. It is water-proof, solar powered and virtually indestructible. It also is an attractive fingernail ornamentation.

Rogers’s team also has teamed up with Gatorade, the Air Force and L’Oreal to develop a small, flexible skin patch to capture and analyze sweat. Using microscopic channels embedded in the patch, sweat is collected in four circular compartments for analysis. The data produced by the device informs wearers that they may need to rehydrate or replenish depleted electrolytes long before they feel thirsty or their performance starts to decline. The user can check his hydration and electrolyte status by quickly glancing at the color-coded patch. Because the patch does not interfere with exercise, casual gym goers and professional athletes can both benefit from using it. 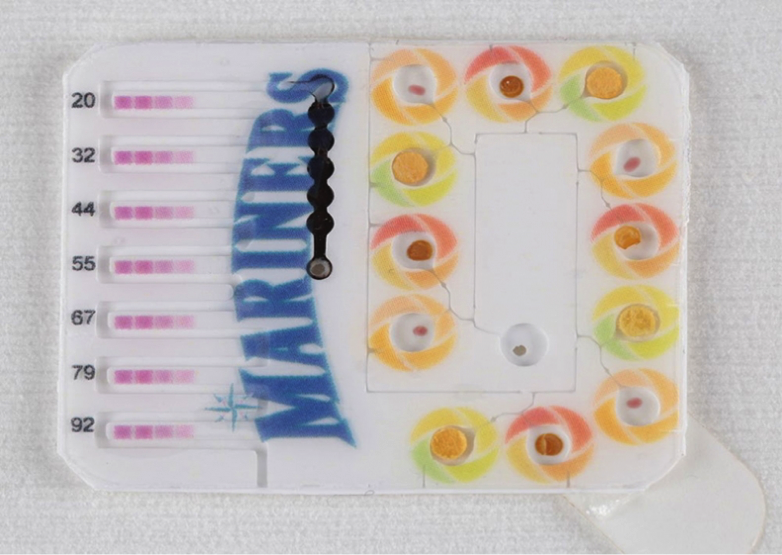 When Roger’s paper was published, the editors decided to feature images of the sweat sensor on the front cover of the journal due to their visual appeal. The news about the sweat sensor reached the curators of the Museum of Modern Art in New York (MoMa), and they decided to display the sensor in a special fashion exhibit, which was an intersection of art, fashion and technology. Rogers fondly recalls, “To place our device in close proximity with Van Gogh and Picasso was pretty cool.” Rogers and his team were honored when MoMa curators decided to include the sweat sensor into the permanent art collection of the museum.

In addition to sweat sensors, Rogers’s group recently developed a skin-mounted device that can measure the blood flow of a vein or artery, warning doctors and patients of high blood pressure conditions that require treatment. Another device helps neurosurgeons detect clogs in shunts (tubes used to drain fluid from inside the skull) without having to do surgery. The shunts provide real-time warnings to doctors performing spinal surgery and to patients post-surgery that a clogged shunt may result in fluids building up and applying a dangerous amount of pressure to the brain.

The goals and direction of research for Rogers and his team are guided by what Rogers calls the “3Ts”: translation, transience, and three-dimensional. The primary focus of the group is to translate materials research into medical products, like wearables and implantables that can be used in medical applications. They work in collaboration with doctors and nurses at the Northwestern medical complex and the Shirley Ryan Ability Lab in downtown Chicago. As to transience, Rogers is working on a device that can be implanted at an injury site on a spinal cord, deliver electrical impulses to nerves to stimulate repair, and then dissolve within 30 to 60 days so that additional surgery can be avoided. As to transformation, they are working to transform devices from two-dimensional patches to three-dimensional mesh that can be implanted in the body to obtain more extensive and accurate information than patches applied to the skin.

The high school science teacher who gave John Rogers the periodic table assignment could never have imagined where that early inspiration would take John Rogers in his career. Rogers’ fascination with how the properties of materials can be changed by manipulating the size and geometry of their building blocks is revolutionizing the healthcare industry.

California has its Silicon Valley focused on applications of silicon in computers and communication devices. John Rogers and his colleagues at Northwestern and other Chicago institutions are creating a Silicon Prairie where silicon will be used to help people lead longer and healthier lives.