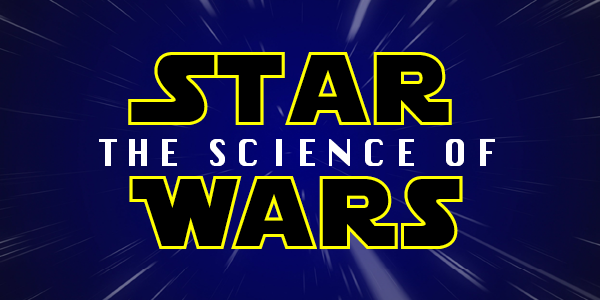 The Force, lightsabers, AI robots (with a sense of humor), hyperdrive, life on other planets, the Death Star – these phenomena presented in Star Wars have captured the imaginations of millions of moviegoers. We’ve seen nothing like them in the real world.  Might we someday?

On April 3, 2019, Dr. Dirk K. Morr, Professor of Physics at University of Illinois at Chicago, walked a large audience assembled at the Harold Washington Library Center through each of these phenomena and offered his take on how they square with the laws of Science, at least as we understand the scientific principles today.  It was a fascinating presentation, well worth your time to view on C2ST’s YouTube Channel (the presentation included film clips, music and very cool graphics).  Here are a few bottom lines from the program.

Yoda can move heavy objects with his mind.  Science currently has no explanation for his mystical powers.  However, Science hasn’t nailed down exactly how gravity works, and the validity of the “Standard Model,” which purports to explain other forces such as electromagnetism, the strong force (nuclear bonds) and the weak force (nuclear decay), is still under examination and subject to refinement or revision.  So might we someday discover how to move objects with our minds, similar to how the earth’s gravity keeps us and the moon from spinning off into space?  Unlikely, but hundreds of years ago we didn’t know about the strong and weak forces.

These glowing, cylindrical staffs of light hang together and clash and cut like low-tech swords.  But laser light does not confine itself to a cylinder; it races to infinity or until it strikes an object.  Laser light could be captured in a cylinder, but that would require mirrors at both ends, which the light sabers do not have.  Also, with mirrors, all the energy would be inside the tube, not outside it. If there were no tubes to contain the light, the laser beams would pass through each other; they would not clash like swords.  So,it seems unlikely that we will be able to create laser lightsabers.  Indeed, if we could pull off the technology to intensify and contain laser light in a portable device, we probably would not use the technology to create swords — too Medieval.

R2D2, C3PO and a few of the other robots in Star Wars appear to have human-like consciousness and a sense of humor.  We are not there yet with Artificial Intelligence.  But there is reason to believe we could get there in the foreseeable future.  We have computers that are capable of teaching themselves to play very complex games, such as chess and Go, by trial and error and developing such effective strategies that they can defeat all human chess champions.  These machine-developed strategies are different than any human being has devised.  The machines have been uniquely creative in this sense.  Whether and how computers can take the giant leap to consciousness and intentionality, as HAL did in 2001 Space Odyssey, (hopefully in a more human-friendly way), remains to be seen, but it is not crazy to think such capabilities will develop within the next century.

The characters in Star Wars must travel fast to reach far away worlds.  They cross galaxies in seconds using hyperdrive, which enables them to travel many times the speed of light.  But according to Einstein’s General Law of Relativity, the speed of light is a constant, and nothing can exceed it.  As the speed of an object increases, its mass increases and the amount of energy required to accelerate it increases.  None of these changes are noticeable on the highway or even in jet aircraft.  But other experiments involving acceleration of particles confirm this phenomenon.  Ultimately, there is not enough energy available to accelerate an object faster than the speed of light.  At least, based upon what we know now.

Life on Other Planets

Current science can neither confirm nor deny the possibility of some sort of life on other planets.  We have discovered at least 54 planets that we are confident have temperatures that allow for liquid water, which is critical for life as we know it. We have discovered these planets by detecting changes in the brightness of stars caused by planets orbiting around them and blocking some of their light from earth.  But these planets are very far away.  It is possible that life has developed on those planets and the radio and light waves generated by those civilizations, if they exist, have not yet reached us because of the distance between our planet and the exoplanet.  It is also possible that life on other planets is based upon different elements than life on earth, so that our limiting assumptions about the necessity of liquid water to sustain life are unduly restrictive.  The best formula we have for estimating the likelihood of life on other planets has a huge range of predictions because the values of the relevant variables in the formula are so uncertain.

Dr. Morr made the point that science is driven by imagination and constant questioning. What might seem unlikely based upon what we know now, could happen, and what we think are scientific laws today, might be proved wrong tomorrow.  On October 9, 1903, a New York Times Article stated that man might fly someday and estimated it could take a million years for that to happen.  On December 17, 1903, the New York Times reported the Wright Brothers took flight.

Please consider viewing the full video of Dr. Morr’s presentation to learn more about what we know and don’t know about our world and what exciting possibilities exist for the future.  Many thanks to Dr. Morr for an outstanding program.

Robert Kriss is a technology lawyer, senior counsel at Mayer Brown LLP and a member of the C2ST Board.