The dramatic Olympic exit from popular American gymnast Simone Biles has reignited the conversation around mental health and athletes. During the 2020 Tokyo Summer Olympics, Simone Biles became the latest athlete to share her mental health struggles as she decided not to participate in two competitions. Her decision to leave these competitions during the Olympic Games was hard for many U.S fans to accept, but her decision to prioritize her mental health over the games was supported by many all over the world. Biles admitted to the world that she was suffering from the perilous “twisties”, a phenomenon foreign to most athletes, but known too well by fellow gymnasts. As athletes fight for a balance between their mental and physical health, Biles’ case of the “twisties” highlights the dangers associated with lacking this balance. 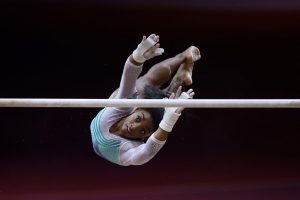 The twisties usually occur from the constant flipping and twisting in the air, which can be a scary experience for first time gymnasts. The twisties is the failure to recognize the position the body is located in during a spin, typically at a high altitude off the ground. This is common in gymnasts, but even some ice skaters and trampolinists have felt a variation of the twisties when performing. The twisties have also been described as “the sudden inability for a gymnast to make the requisite spins” during a routine. As Biles was trying to perform a “2 ½ twist,” she ended up doing a “1 ½  twist”. She later admitted she felt “lost in the air”. This feeling of confusion was echoed afterwards by other competitive gymnasts collectively saying that their brain and body are not always in sync. Their feeling is an appropriate description–the asynchronous movement is attributed to the brain not actively recalling muscle movements in the body anymore.

The cerebellum, a.k.a the “little brain”, controls our balance, coordination, and learned motor skills. The cerebellum works closely with the spinal cord to perform all the right moves, but when it fails those motor skills learned in training matter no more to the rest of the body. It is suggested that there is a sudden lack of functioning in the cerebellum, which is located in the back of the brain, and near the brainstem. Because these are trained athletes, the onset is still unknown, though psychological stress could be a trigger for those who lose control of their body during such complicated moves. The 24 year old gymnast can reach almost ten feet in the air during her routines. That height can be overwhelming while experiencing the twisties, especially when coupled with mental health concerns. Her decision to forego two competitions during the Summer Olympics could have saved her life, as she could have suffered from broken bones, concussions, dislocated vertebrae, or even fatality.

Not prioritizing mental health in competitive fields like this one can cause long lasting effects that can be even more detrimental than the effects of the twisties. Other athletes that have expressed mental health problems have discussed developing anxiety, depression, suicidal ideation, and even cognitive decline if mental disorders are left untreated. To combat this, many resources have been set in place for both professional and college athletes. This website thankfully provides resources to help those struggling. The British Association of Sport and Exercise Science has compiled a list of articles and journals that also recognize this hardship in athletes. These initiatives encourage athletes to care about their mental health, just as much as their physical health. Coaches, trainers, and even fans should recognize that there is no future of sports without the mental stability of our favorite athletes.

4 thoughts on “The Science Behind the “Twisties””