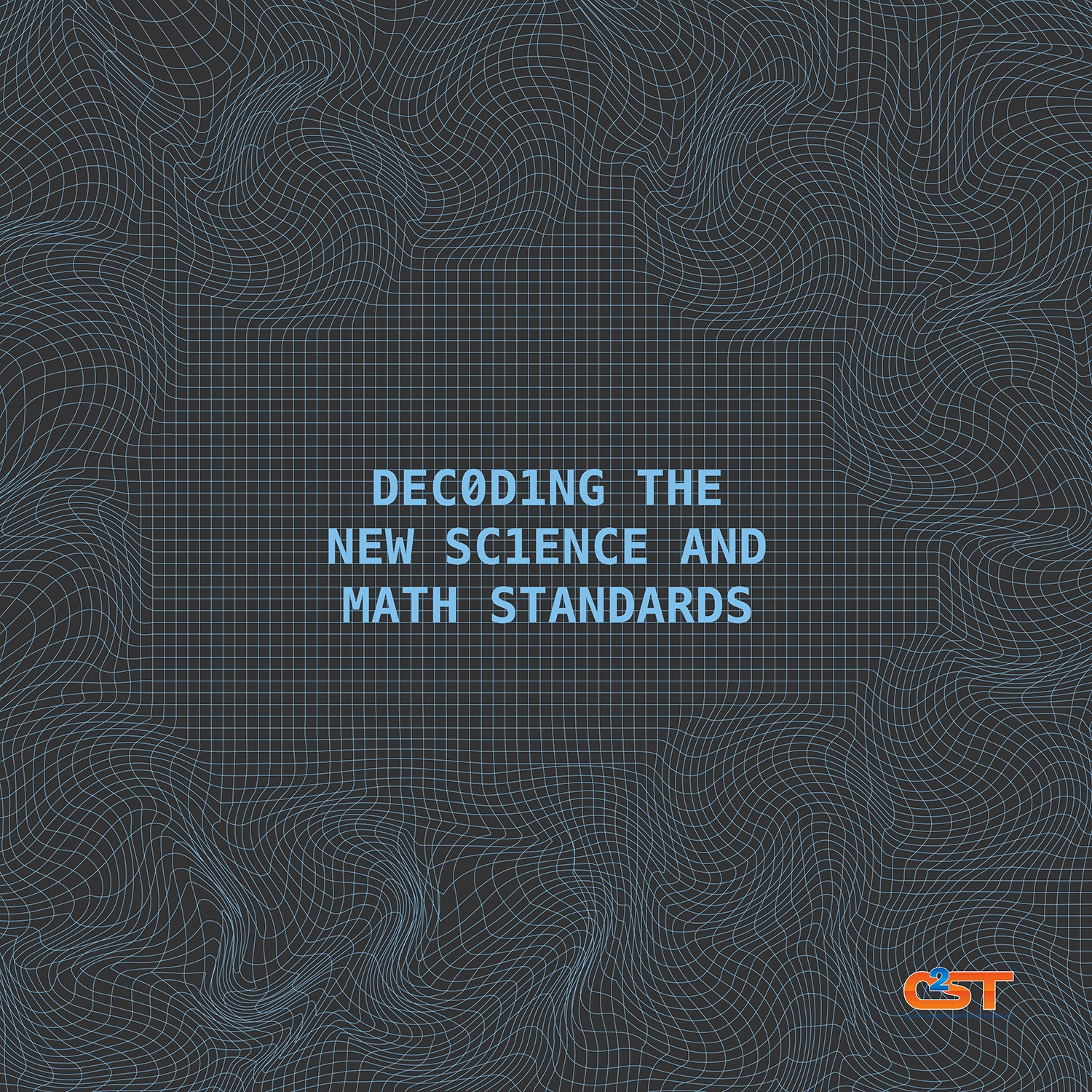 In recent years, there has been movement towards a common, centralized set of standards across the United States which has led to the implementation of the Common Core in 43 states. The emphasis of the Common Core is on math and literacy, which left a need for a set of science standards as well. This led to the development of the Next Generation Science Standards (NGSS), and together these standards are helping to shape modern education, while also spurring much debate over the goals and outcomes of education. In order to better understand and investigate these standards, the Chicago Council on Science and Technology produced two Question and Answer Sessions discussing these standards for the public. Composed of panelists from across the field of education with many diverse experiences, the panel’s goal was to help the public understand these standards and answer the many questions surrounding them. The questions and the content of the answers and discussions given by the panelists and audience members is below.

What are the new standards for Math and Science in the Common Core and the Next Generation Science Standards? What makes them different?

The goal of the Common Core is college and career readiness, and as such the new standards emphasize building curriculum across grade levels in addition to crosscutting curriculum across subjects. There are fewer standards, which are more focused, allowing students to delve deeper into subjects rather than having a curriculum that is “a mile wide and an inch deep.” In the NGSS specifically, there is an emphasis on using engineering techniques in problem solving. The emphasis on engineering reflects how modern science demands students to be able to recognize patterns and integrate knowledge across subject material. The goal of these new standards is to prepare students for post-secondary education and careers, so the developers emphasized involving students in investigating the problems of society and thinking critically about solutions. These standards are also holding not just students to higher levels, but teachers as well. Teachers are seen as tools and resources for the student, but instead of lecturing, the emphasis is on facilitating stimulating questions that emphasis critical thinking.

Are these new standards higher than previous standards and are the expectations for our students higher? Is this in response to global competition?

While these standards are more demanding for both students and teachers, they are more achievable for both and are more in line with progressing the country in terms of its position in the global economy. More children are expected to succeed under these standards as the emphasis is “hooking” kids onto science by emphasizing common science backed with critical thinking.  While the need for nationwide common curriculum was highlighted in terms of global competition, there are states in our country that have just as high achievement levels and test scores as our global competitors.  The goal of these standards is to make all states recognize the need for high standards for both students and teachers, and align these standards to college and career readiness in terms of the global economy.

What does it mean for Illinois that these standards are common? Will it help or hurt our students?

A common curriculum across the nation provides many strengths for students, teachers, professionals, and administrators. Right now, each state has its own set of standards and textbooks, but with the implementation of the Common Core, better textbooks can be written that focus on these standards specifically.  Content can be more focused and detailed, rather than trying to encompass a curriculum that is too wide for any class to cover in a school year. Publishing companies now are delving deeper into these standards to make sure that their textbooks and resources align with the standards. This in turn will create more mobility for teachers and students to help eliminate confusion as to where students are coming from—students in theory will be able to seamlessly move from state to state or school to school and still be learning the same thing, in states where the standards have been adopted—and will likewise have a good sense of what teachers will be expecting from them. Teachers will be able to pool their resources, leading to improved professional development. These new standards are based on research and will be refined as they are put into practice. The emphasis is now on collaboration and researching innovative solutions, not for one state to have the best standards while watching the rest of the country fall behind.

These standards were developed from research conducted in the 1990’s and have been implemented under the impression that changes will need to be made to the curriculum and how it will be integrated into the schools. The Common Core and NGSS emphasize problem solving and how to approach difficult questions that oftentimes have not been solved before. In the old standards, attempting problems like these was never taught to students. The focus is not on memorizing facts and definitions, but rather teaching students how to recognize patterns and distinguish what concepts represent, and then tying these concepts together. There is a focus on re-envisioning science inquiries by constructing scientific arguments using evidence to make sense of the data. Teachers are expected to give students more feedback in terms of how they can improve the quality of their work. Classrooms are expected to be centered on dialogue, not just between students and teachers, but also between the students themselves. Teacher cooperation is central to the Common Core, as ideas and techniques are expected to be shared across the country to move closer towards a curriculum that benefits as many students as possible.

Parents will notice a different in their child’s education in many facets, including homework. There will not be all the present worksheets, and questions will appear different than how they look currently. As opposed to asking questions that only have one possible answer, questions will be worded so that students will be asked to come up with multiple solutions. For example, instead of being asked to find the area of a rectangle, the student might be asked to come up with many different shapes that have the same area as that listed. There will be a shift from reading and taking notes to work that involves writing an argument, analyzing data, and critiquing an argument. Students should be able to explain what they are learning in terms its concept and significance, focusing on why they are learning it in the first place. Deconstructing an argument is integral to the problem-solving process and is emphasized in the Common Core and NGSS. Perseverance is key, as there might be problems that neither the child nor the parent will be able to solve. But through attempting these problems and talking them through with the child’s teacher, the child and the parent will be better able to understand the teacher’s goals in terms of education. Learning how to react to problems like these, ones that a student has never seen before, will help them learn how to react to problems they encounter in the real world, a place where there are no defined steps for how to solve many of the problems we encounter.

Why are some states opting out of these standards, and why is there such an emphasis on testing, especially testing of math and reading proficiency?

The Common Core was developed in response to declining scores in the US in math and reading. The NGSS are a fairly recent development and are still in the early stages of development and implementation. Currently, states are focusing on implementing the standards, helping teachers to incorporate them into the classroom, and helping the community comprehend the standards and what their outcomes may be. One of the reasons many states have opted out of the standards is because the two Assessment Consortiums being used – PARCC and SBAC – are extremely expensive in terms of the resources they require. Both tests are online, meaning each child needs a computer, plus there are the costs involved in administering the tests. PARCC and SBAC are both still in the development phase, including both how they will be administrated, and the time that will be allotted to students to complete the tests. Many states are also worried because of the higher standards demanded by the Common Core and NGSS, which will most assuredly mean that less students will be perceived as being proficient, at least in the early years of the testing. As more research is conducted, and parents, students, educators, and administrators become more familiar with the standards, the questions and debate surrounding these new standards should subside.

If proficiency is what we are testing and right now Illinois only requires two years of science, how are we going to implement the Next Generation Science Standards? If the standards themselves go all the way back to kindergarten, how will educators and administrators phase them in?

As the standards are written now, there is no way that all the material required by NGSS can be covered in two years of high school. Currently, a bill was proposed that would increase the science requirement in secondary education to three years. Phasing in will also pose a hurdle with the standards, as it will take years for these standards to be completely integrated into the common classroom. Teachers, for now, will not be able to assume that all students are coming into their classroom proficient in the Common Core and NGSS standards. Due to this, teachers should focus on creating a hybrid model of the old and new standards until they’ve been implemented across grade levels, and students have had time to adjust to them. Eventually the hope is that once these standards are phased in, curriculum will be crosscutting through all grade levels, and students will be able to build upon their knowledge as they go through their education.

Since there is a greater demand for students to articulate their ideas verbally and through their writing, what challenges will this bring to English Language Learners (ELL) and what resources will be provided to those who are not as well versed in academic language?

There are many ways that teachers and administrators can support ELL, whether it be through small group instruction or through outside resources. Teachers and parents must start to mirror this academic language in conversational language so that students can begin to comprehend how it will be used within the classroom and everyday life. The focus should be on providing those students who identify as ELL and those who aren’t as well versed in academic language with support early upon their entry into the system and the goal should be to have them fully integrated within a couple of years. Teachers can focus on language-heavy subjects like biology and Earth science to help these students learn and develop their writing and comprehension skills.

Sally Whitaker is a student at Loyola University, where she studies Biology, Chemistry and Education Policy