If you’re wandering around the chambers of the Deep Mine Microbial Observatory, what was once a gold mine in South Dakota, it might feel as though you are — until, perhaps, you take a fluid sample from a borehole in the tunnel wall, run it under a microscope and observe one of the droplets teeming with microbial life.

Caitlin Casar, a third-year Ph.D. student at Northwestern University, says scientists can’t yet answer the big question: Are we alone in the universe?

“I hope that there is life on another planet, but whether or not it’s probable, I don’t think anybody can really say,” she said. 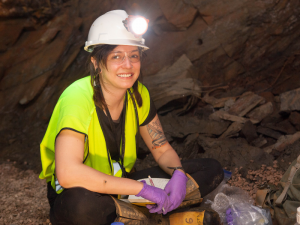 Casar’s studies of fluid samples from fractures in the mine aim to chip away at the question. Joined by other scientists from the University of Southern California and NASA’s Jet Propulsion Laboratory, Casar studies the microbes living in biofilms, a matrix of microbes and their slimy secretions that help them adhere to solid surfaces. These microbes have the potential to tell us more about what extraterrestrial life might look like — and how to find it.

“Our ability to see the weirdos is exploding,” Maggie Osburn, an adviser on Casar’s research team, said of this growing body of research.

The “weirdos” are organisms living in the depths of the mine despite the limited availability of sunlight, oxygen and organic carbon, which come in abundance on the Earth’s surface. Underground, the microbes are adapted to an environment that might have a lot in common with a Martian landscape. Scientists believe that if they can improve their understanding of how these organisms make a living, then they can better target their search for alien life.

The gold mine, Casar said, serves as a smart analog in this mission. For instance, the rock on the Red Planet and in the mine is known to be iron- and sulfur-rich, Casar said. And while there isn’t definitive proof that there is liquid water on Mars, there is evidence to suggest that there could be water beneath the surface.

Microbes get their energy by transferring electrons from one compound to another — for instance, she said, by transferring an electron from hydrogen gas to dissolved sulfate. Water is an essential ingredient for these microbial energy sources when water and rock react under the right conditions.

“And so if you have this iron- and sulfur-rich rock that is fractured, and has fluid sitting in it, then [those] reactions can happen,” she said, just as they do in the mine.

Casar is familiar with microbes living in extreme environments. Before working out of the South Dakota mine, she studied bacteria that call deep marine hydrothermal vents and continental ultrabasic springs “home.” The research falls within the vast, multidisciplinary field of astrobiology, which aims to discern what life might have been like at Earth’s inception and, at the same time, what it could look like on other planets or moons. 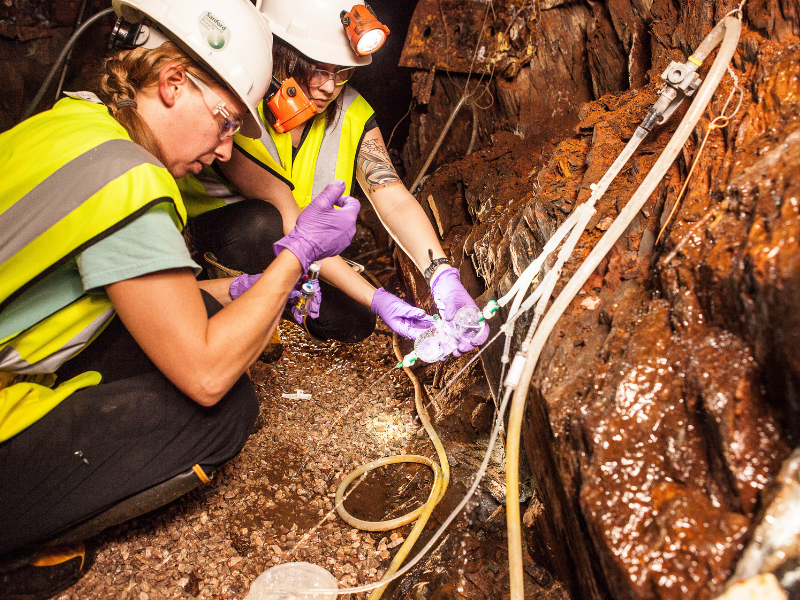 Brittany Kruger (left) of the Desert Research Institute, field coordinator for Casar’s work at the Deep Mine Microbial Observatory in South Dakota, and Casar collect samples from a fluid fracture in a wall of the mine. (Photo credit: Matthew Kapust/Sanford Underground Research Facility)

Astrobiology is not a new field, but it is gaining momentum. In recent decades, scientists have made crucial discoveries: at a South Africa gold mine, for example, researchers in 2008 discovered an entirely self-sufficient microbe living in fracture fluids about 2 miles underground. The scientists learned by mapping its genome that it has a specialized set of metabolic genes that enable it to survive in isolation.

“It was just really interesting because this was the first microbe where people were like, ‘OK, this is for real the kind of microbe we could find on another planet, that could actually handle the conditions that we’re thinking are going to be on another planet,’” Casar said of that discovery.

The microbes living in the biofilms Casar studies employ similar tricks. The fluid-filled fractures in the mine are anoxic, meaning there is no dissolved oxygen, and organic carbon is hard to come by. So instead of breathing oxygen and eating organic carbon, those microbes can get their energy by “breathing” or “eating” minerals using a process called extracellular electron transfer.

In fact, the microbes form the sticky matrices in part to get as close as they can to the minerals they like best for energy, said Casar, whose ongoing research has shown that the biofilm-forming residents of the fracture fluids often favor iron-bearing minerals like magnetite.

Underscoring the significance of subsurface biofilms, in February Nature Reviews Microbiology published a paper that estimated the majority of prokaryotic life on Earth could be living in subsurface biofilms. Prokaryotes, which include archaea and bacteria, are unicellular organisms that first populated the planet billions of years before plants, animals or humans.

“The abundance [of prokaryotic life] is overwhelming,” said Hans-Curt Flemming, a retired environmental microbiologist and co-author of the review. And yet, he added, they are little understood, in part because of how difficult it is to reach them in the deep subsurface. “This is still, I would say, not a white spot but a light-gray spot on the map.”

In a recent study in Astrobiology, Flemming and his co-authors tested biofilms’ viability in space. They affixed samples of biofilms and planktonic, or isolated, bacteria to the outside of the International Space Station for two years, and subjected them to Mars-like UV radiation. The cells living in the biofilms, the researchers found, had a much higher survival rate than the isolated ones.

“The biofilm lifestyle is tremendously successful,” agreed Penny Boston, director of the Astrobiology Institute at NASA.

Boston, who spent years studying biofilm communities in underground caves, said the matrices enable microbes to change the chemistry of the environment around them. That’s important for living in environments where organic energy sources are scarce, such as caves, mines or underwater vents.

By analyzing the microbes living under these conditions, Boston said, scientists can improve their understanding of the fundamentals of survival on Earth, “teasing the edges of what our kind of life can accomplish.”

The upcoming Mars 2020 mission should bring back data that will help build a more complete picture of the habitat on Mars, Boston said. Astrobiologists are especially excited about plans for on-site experiments in which the rover will collect rock samples that will be retrieved years later.

But for now, the race is on to understand the rock-eaters living in biofilms here on Earth.

For Casar, that involves years of studying the chemistry of the fracture fluid — such as the pH, ion and gas concentrations and temperature — and the DNA — the same blueprint for life contained within each and every human — extracted from samples taken at the mine.

With statistics, microscopy and a lot of patience, her work will begin to shed light on the ecology of biofilm communities in the fractures in the gold mine.

Of the big questions Casar is trying to answer, like whether or not we’re alone, she said: “I feel like they’re straightforward, simple questions. But in order to answer them, it’s like a mountain you have to climb to make that happen.”

Lauren Robinson is a graduate of Northwestern University’s master of science in journalism program, where she studied health, environment and science reporting.