Argonne National Laboratory is home to several supercomputers with impressive computational power. These computers have aided research efforts in fields such as energy, climate, health, cosmology, computing, and more. The next level of the evolution in supercomputers will continue to help scientists address national problems in science and technology. Processing data faster and more efficiently will lead to faster solutions and pivotal discoveries to improve our daily lives. Therefore, with supercomputing on the rise, there is a great need for continued performance capability and efficiency. One of these scientists that works toward this goal is Dr. Sam Foreman. 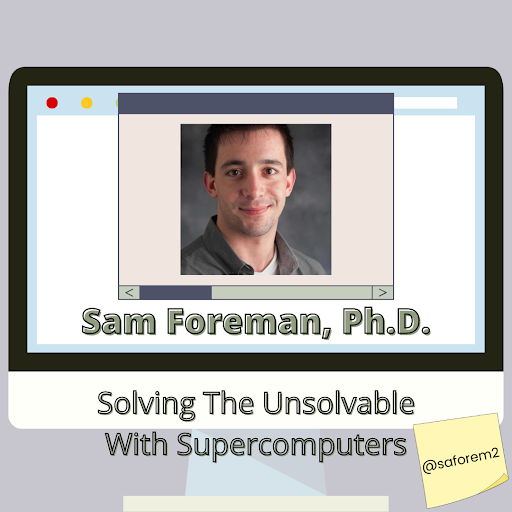 Through a fellowship in the Science Graduate Student Research (SCGSR) program, Dr. Foreman worked on his thesis on lattice gauge theory at Argonne. Now, Dr. Sam Foreman is an assistant computational scientist working in the data science group at the Leadership Computing Facility at Argonne National Laboratory. Dr. Foreman has a background in Engineering Physics and Applied Mathematics that melds into his work with software development and code writing for machine learning.

I recently tuned in with Dr. Sam Foreman on Zoom to talk about his research on machine learning to streamline computational processes, particularly in lattice gauge theory and lattice quantum chromodynamics (QCD).

C2ST: You previously mentioned to me that you had the opportunity to continue working on your thesis project through a fellowship at Argonne. Can you tell us a bit more about how that has shaped what you are currently doing?

Dr. Foreman: Continuing from my thesis work, my research currently involves lattice gauge theory and lattice quantum chromodynamics (QCD). QCD theory is the theory of strong interaction, essentially the strong force that binds the nucleus together. You may have heard of quarks and gluons, which are the building blocks of protons and neutrons that in turn form the nucleus. This theory is generally analytically intractable, meaning as of right now there aren’t known methods to solve things analytically. We can’t exactly write an equation down and solve it through pen and paper. But it’s more complex than that since over the last 50 years we are still no better at solving it. However, one way to get around this problem and make this theory useful is to simulate it on computers.

C2ST: Can you describe how these models are supposed to work?

Dr. Foreman: For example, we can simplify the full (four-dimensional: x, y, z, and time) theory by looking at simplified “toy models” in two dimensions. These simplified models are useful because they allow us to gain insight into the model’s behavior while remaining computationally feasible. In order to better understand the behavior of these particles, we can discretize space-time onto a four-dimensional lattice (x, y, z, and time) and simulate it on a computer. By looking at how this lattice evolves in time, we can make predictions about its behavior and attempt to draw conclusions about our theories. Unfortunately, these simulations are incredibly expensive to run, requiring many months even on the world’s fastest supercomputers. In my work, I’m attempting to use machine learning to help speed up these simulations.

C2ST: That’s where you come into the equation (no pun intended). With these models in mind, what is your process like? Are you working on the drawing board or is it a lot of trial and error on the computer while you’re coding?

Even generally, developing code for scientific applications is different from web development. Scientific code has a lot more theory behind it, so it’s trickier to jump into. There are lots of equations that need to be simplified and translated into code. For instance, if I wanted to calculate a particular quantity, it may depend on 5 or 6 layered equations that first have to be written out and translated in an easy-to-follow fashion within the program.

C2ST: Do you have to use special programs to accommodate scientific coding?

Dr. Foreman: Hm, a lot of what I currently do is machine learning (ML) and most ML code development is done in Python. However, there are a ton of different programming languages used for scientific software, for example, Julia, C/C++, Fortran, etc. Even Matlab and Mathematica still maintain a decent user base.

C2ST: Since much of your time is spent working on code, what are some of the challenges that you face?

Dr. Foreman: One of the challenges is that oftentimes applications are very narrowly focused. In my area of physics especially, there aren’t a lot of existing tools and so a lot of things need to be done by hand. Since this is a very niche topic, it is uncharted territory and you kind of feel like you’re just winging it. In that same vein though, the uncertainty is part of the fun of it! I think research would be boring if everything were a linear path and there wasn’t that unknown factor of “will it or won’t it work”.

C2ST: Aside from your research, I see you have been busy with other extracurriculars! You have been involved with Argonne’s Q&A threads on Twitter. Were you always active on Twitter or did your involvement change throughout your academic and professional career?

Dr. Foreman: I’ve been on Twitter since about 2011-2012. Back in 2012, I was an undergrad and I only used Twitter casually until grad school. Once I was in grad school, I came to appreciate Twitter not only as a networking tool but also as an easy way to follow interesting people doing interesting things. It was a great way to get started in exposing myself to these things on my feed and staying up-to-date. I had never really had plans of being on Twitter, but I’ve found it to be really useful! Honestly just knowing that there are people out there who are interested in my work is hard to wrap my head around sometimes.

C2ST: What are your thoughts on using Twitter in the current scientific landscape? I feel that social media platforms can seem unassuming at times, but can really shake up one’s opportunities.

Dr. Foreman: For me, Twitter has evolved into a useful tool for meeting new people, setting up collaborations, and even serving as effective networking for jobs. There was a guy that I had known and followed. He worked at Intel and I had casually retweeted posts of his here and there. At the end of grad school, I tweeted that I was completing grad school and would be on the market for a job. He reached out to me and said that Intel was hiring and that my research was in line with what they were looking for. They even offered me a job! The mere idea of coming out of grad school and being offered these coveted research positions really blew my mind. All of this was facilitated through minimal interactions online! It was definitely a turning point in my career and general view of Twitter.

Even now as a postdoc, I really started to see more value in having a presence on Twitter as a tool to share my own research. It also made me think about how other researchers may share similar feelings and struggle with sharing their own work. “Are my thoughts of value to others?” “What can I say that other people would take meaning from and think it was interesting?” Lately, I have been getting better at grappling with those feelings. As a scientist, particularly in this current climate, it is in your best interest to be authentic and show who you are. It would be a disservice to yourself and others if you aren’t genuine in these interactions. I want my own personality to shine through, and so far, people have been receptive to it!