People have been fascinated by zombies for over a century. The modern zombie concept emerged in the 1920s thanks to literature, but it soon shambled toward greater popularity with the advent of cinema, television, comics, and eventually video games. Over the years, the zombie craze has refused to die (pun intended)! When most people hear “zombie,” they think of undead humans but biologists have connected the term to several real-life viruses, parasites, and bacteria. 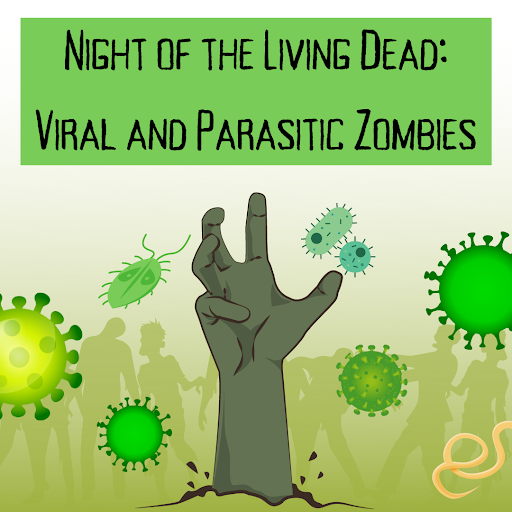 Some uses of the term apply to viruses that lead to death of the host under conditions that are optimal for spread of the virus. For example, the HearNPV virus that appears in cotton bollworm moth caterpillars, enhances viral spread by tricking the caterpillar to climb as high as possible before death.

A study published in Molecular Ecology found that the HearNPV virus enhances three genes associated with visual perception pathways. This photosensitivity alters the caterpillar’s perception of the sun, thereby altering their migration patterns and causing hyperactivity (making them move even further). Essentially, the virus hijacks the caterpillars’ visual perception, compelling them to climb higher (closer to the light from the sun) where they are more likely to be caught by predators. This makes it easier for the virus to spread

Another zombie entity is the parasite Toxoplasma gondii (T. gondii), which reduces anxiety in mice. We usually think of less anxiety as a good thing, but T. gondii causes mice to have reduced fear of predators, including cats.

The life cycle of the T. gondii is fairly simple: The parasite reproduces in the intestines of cats, then mice encounter the parasite through contact with cat excrement. Following that, a new cat eats the now-infected mouse, and the cycle starts over.

But how can the parasite be sure the mouse is eaten by another cat? It can’t, but the parasite can alter the mouse’s perceptions to make it more likely to be preyed upon. A study published in Cell Reports determined that T. gondii reduces anxiety in mice and increases exploratory behaviors while reducing predator aversion. Essentially the parasite makes mice unafraid.

Scientists also observed the development of cysts in mice with this parasite. The severity of behavioral changes in mice correlated with the amount of cysts and resulted in brain inflammation.

What’s unnerving is T. gondii is not specific to mice, it can infect humans. It is predicted that about 11% of people in the US are infected with T. gondii. T. gondii infections in humans are associated with increased risk of schizophrenia, traffic accidents, and suicide attempts. According to a scientist whose focus is on T. gondii, Jaroslav Flegr, the effects of the parasite on human personality is (as far as we know) minimal. Based on these studies, it seems like T. gondii creates fearless zombie mice but doesn’t get that far in humans.

Finally, on our little list of zombies, we have the recently identified gut zombie viruses. A study published in Nature revealed the presence of something called colibactin, a metabolite produced by bacteria in the gut. Colibactin doesn’t directly kill microbial gut cells but it reanimates dormant viruses within those cells, providing what might be the most literal “zombification” yet. The hidden viruses in the gut are awakened in microbial cells, killing the cell, and releasing numerous bacteria. This influences the gut microbiome, meaning these zombie viruses can affect a human’s overall mood and health.

So far, researchers have identified several zombie organisms. We’ve seen that these zombies can impact the ways animals (and humans) perceive their environment and in many cases, even how they act. While these aren’t the traditional monsters we think of when we say “zombie,” they do sound pretty scary. Luckily, these zombies don’t impact human actions too aggressively. But, as a precaution, scientists are constantly on the lookout for any zombie organisms that could cause us harm.