Valentine’s Day came and went just a few weeks ago. While some people may have found their soulmates, others are still searching for their sweetheart. There are a plethora of ways to find that perfect someone to spend your life with, from dating apps to blind dates to meeting someone out in the world. Dating can be overwhelming. Perhaps love is a game of chance, or maybe we just have to look at romance scientifically. 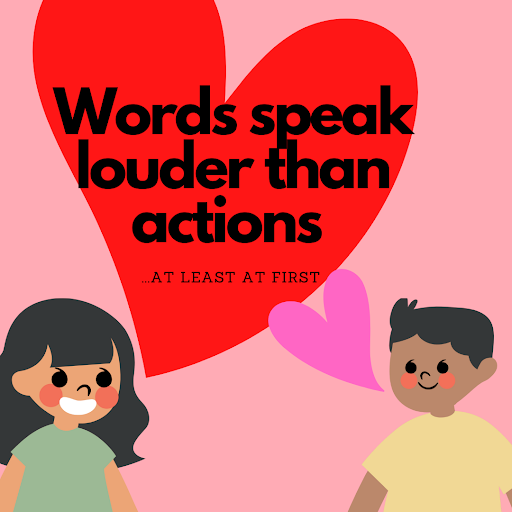 Science has shown that many factors impact attraction between people but with the widespread use of online dating many of those factors aren’t applicable anymore. Mimicry of nonverbal cues like posture and hand gestures increases initial attraction. People feel stronger empathy, closeness, and affection for those who match their facial expression, tone of voice, and movements presumably because humans find comfort in those similar to ourselves. But you can’t see hand gestures over Tinder and Bumble. If body language plays a major role in attraction, then how do interpersonal dynamics shift in visual or textual language? This is what scientists are interested in learning more about.

Some scientists believe that how you speak increases desire between potential romantic partners. This assessment of stylistic similarities in a language is known as language style matching (LSM). What’s fascinating is LSM has nothing to do with the content of discussion–it’s all about sentence structure. When scientists at the University of Texas studied interactions between speed daters, they found consistency and location of use-of-function words in sentences such as “it,” “but,” “never,” and “that” were a good predictor of affection. Through these interactions, they could calculate LSM scores for each pair. They saw that over 33% of the speed date pairings with above-average LSM scores compared to 9.1% of those with lower LSM scores desired future interactions.

The second part of this study compared in-person interactions to online interactions and found similar trends. Even through instant messages, higher LSM scores predicted relationship stability. During the study’s 3-month follow-up, over 75% of couples with high LSM scores were still dating while only ~50% of couples with low LSM scores stayed together. These short-term studies display how much interactions between two people influence early attraction and feelings of companionship. It’s important to note that there aren’t many studies about how LSM impacts long-term relationships, meaning, high LSM scores aren’t the only factor in successful relationships.

LSM scores don’t exclusively apply to romantic relationships. In a study at Stanford University, researchers observed how LSM affected group interactions. Teams of 4-6 people were grouped to work on a problem-solving task either in-person or through online messaging. They found that the LSM average between all group participants was a strong indicator of group cohesiveness and potentially influences task performance.

Many of our relationships, both romantic and platonic, require thoughtfulness but also possess a subliminal quality. So, whether we’re talking about getting along with your coworkers or finding a romantic partner, it’s important to not only take note of what they’re saying but also how they’re saying it.

If you would like to compare LSM scores between you and your friends, the University of Texas developed a LSM scoring website, go check it out!