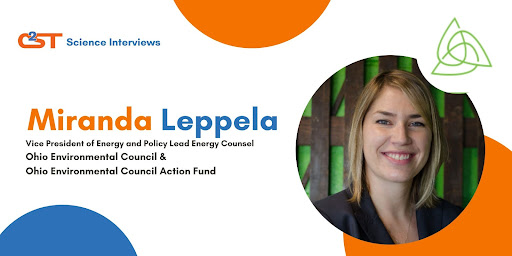 Rowan: Generally, what made you interested in advocating for clean energy and getting involved in the clean energy sector?

Miranda: I grew up with an interest in the outdoors and [I was] passionate about environmental issues. When I was really young, my mom started a recycling program at my school because one didn’t exist back then. My brother was [also] involved in [an] Environmental Youth Project, I think it was called. I went and watched the whole youth organization process and got really interested. I am not a science person really, so I became an attorney. I wanted to make sure I was doing something within my skill set to help the environmental movement. [What fueled that passion was when] I started taking my undergrad major called Law Letters in Society at the University of Chicago. [It is a] kind of a hybrid of law, history, and advocacy so that you learn of all these different pieces. I supplemented that by taking a global warming science class and some [other] science-based classes because I knew I needed to know those things. After that, I went on to law school because my skill set is best suited to be a legal advocate on environmental [issues]. That’s how I got into it. I will say one of the best parts of my job is getting to work with expert witnesses to help us prove our point with the science and the facts that we need to have.

How do you transfer those scientific facts and data to make them more accessible to target audiences?

So it depends. It’s really important to think about who your audience is. When I’m talking to community members, we want to focus on the benefits and real-life experiences that impact people.. If you have a more conservative audience that is going to look at this from a cost-saving angle, you want to talk about the cost-saving benefits of clean energy. If they are more libertarian, you can talk about how this is a great benefit because this gives you the ability to generate your own power. If you’re talking to an environmental group, you’re talking about the clean energy benefits and the fact that we’re combating climate change with different solar projects or whatever it is that we put onto the grid. It’s really important, in what I do, to think about who are our audiences. If it’s a judge in a legal case, then I need to make sure that I have all of the proof, data, and facts, written in and cited. But, it’s also important to make it understandable to someone that is not in my shoes and doesn’t do this type of work every day, so plain language is key. On the public side of things, we are very lucky to have a communications team here at OEC. They’re very helpful in making sure that anything that I say is run through a lens of a general community member and not necessarily somebody that is very familiar with [these topics]. When I’m doing legal work, it’s really important to make sure that I have a good framework and that tells the story and makes the point we are trying to make to win the case. So, making sure that you have all the pieces in there is important, but making sure that you’re telling a story that is interesting to read and understandable is also really crucial.

From your perspective, what role do you think clean energy plays in the bigger movement to mitigate and adapt to the impacts of climate change?

We need to be moving as fast as we can to combat climate change. We are not [currently] in Ohio moving as fast as we should be, I can tell you that. The more progress we make on shifting toward more clean energy, and the faster we do it, the better shot we have at stemming the worst impacts from climate change, because we’re not going to stem all of them. We’re already seeing impacts happen on a daily basis already. So, the faster we get clean energy online, the better chance we have at stopping the worst impacts. Certain communities, especially the ones that are the hardest hit by these climate impacts, are going to be [hit less hard] if we can get [these initiatives] up and running in their communities sooner rather than later.

Would you mind elaborating on some of the current projects that you’re working on within the clean energy sphere?

A lot of what we do is legislative work, and lot of it is at the Public Utilities Commission of Ohio participating in legal cases. One of the really important pieces of legislation in Ohio right now is House Bill 450. It’s a piece of legislation that would enable community solar. Right now in Ohio, you cannot do virtual net metering, also referred to as community solar. This piece of legislation would enable that and [permit a] total of 3000 megawatts to come online. 1000 of [those megawatts] have to specifically be set aside [places] called distressed sites. [For example,] brownfields and other types of distressed sites included in the definition. I think that’s one of the most important things that could happen for Ohio right now. There’s [also] a really exciting project that hopefully will get built. It’s the Icebreaker offshore wind project. It’d be the first freshwater offshore wind farm in North America. Oral arguments were slated for December 7th in the Supreme Court of Ohio. We were party to the case that started back in 2016, but the project’s been going for over a decade. [We were] reviewing all of the research on the technology and understanding whether it was appropriate to be sited in the Lake, and how safe it is. It’s a very small project, it would be about 20.7 megawatts for a total of six turbines on the lake. It’d be about nine miles into the lake. Hopefully, that project will get built because it’s a demonstration project to make sure that it’s safe and that the technology works. The technology to secure it to the lakebed functions basically like a suction cup,  so you don’t have to drill into Lake Erie, which is good because the lake has a lot of pollution that could be disturbed otherwise.  So if that works, that could be a big deal for Ohio because that could open up a new source of clean energy in the future. Those are a couple.

What is one thing about clean energy that you wish more people knew?

Clean energy is our future. But, one of the most important things that people can do is reduce their energy consumption. It’s equally as important [as switching to clean energy]. The cleanest kilowatt hours are the ones we don’t use. Energy efficiency and energy waste reduction are not sexy topics. [Renewables] are much more interesting, and people want to talk about solar panels and wind turbines. However, we eally need to be focused, as a society, on reducing our energy consumption as well.  Insulation, LED light balls, weather stripping–all these things that are not very cool, but  all of these things make a huge difference. I wish more people, and most importantly our utilities and governments, would focus on energy efficiency and energy waste reduction in addition to clean energy.

Check out how OEC’s projects and how to get more involved here!