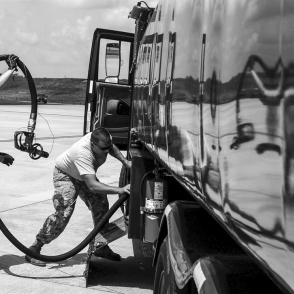 The U.S. military is the single largest consumer of energy resources in the world. In 2016, the Department of Defense’s total energy use was three times more than the rest of the U.S. government and 5 percent of the entire country’s energy consumption. In comparison to other countries, the Department would independently rank as the 20th largest consumer in the world, trailing behind Mexico, Australia, and South Africa.

Despite the enormity of its mission, the Department is actually operating at its lowest energy consumption since at least 1975, when this data collection first started. According to the Energy Information Administration, this reduction can be contributed to specific initiatives taken by the Department, in addition to the drawdown of military operations in Iraq and Afghanistan during the Obama Administration.

In fact, the U.S. military has been an unexpected advocate for sustainability and efficiency measures, as well as for the development and implementation of clean energy technology to meet its mission in the field and at bases around the world. As the Defense Science Board put it, “the payoff to DOD from reduced fuel demand in terms of mission effectiveness and human lives is probably greater than for any other energy user in the world.”

Current Secretary of Defense James Mattis famously called for the Department to “unleash us from the tether of fuel.” He reiterated those beliefs during his Senate confirmation process, writing that the Department should “explore alternate and renewable energy sources that are reliable, cost effective, and can relieve the dependence of deployed forces on vulnerable fuel supply chains to better enable our primary mission to win in conflict.”

Besides the tactical and economic benefits of adopting clean technology, the Department of Defense has also recognized the security threats caused by climate change and the need to prepare for and mitigate its effects.

In its 2014 Quadrennial Defense Review, the Department called climate change a “threat-multiplier.” This is because increasing average global temperatures cause rising sea levels and more severe weather events, which will result in mass migrations of displaced populations, resource and food scarcity, increased conflicts between nations, and the need for rapid response to natural disasters.

Coastal countries like Bangladesh are at greatest risk, where a global increase of 0.5°F would create a 3 meter sea level rise, displacing more than 30 million people. The Intergovernmental Panel on Climate Change predictions indicate this slow-moving crisis will take place within the next 15 years.

Secretary Mattis echoes these concerns about the impacts of climate change  in unpublished written testimony after his confirmation hearing, in which he wrote that “climate change is impacting stability in areas of the world where our troops are operating today.”

The U.S. military’s increased attention to energy efficiency and climate threats has also grasped the attention of its veterans, who have a first hand experience with operational energy and how U.S. dependence on foreign oil impacts military strategy.

As they entered the civilian world, these veterans relied on their military experience and self-teaching to determine their next career goals. Today, there are many programs available to veterans for workforce training and job placement in the energy industry, but very few educational opportunities to show veterans how their technical skills can be used for mission-driven service to strengthen our energy security future.

The first-ever Veteran’s Energy Seminar seeks to fill this education gap for veterans, who have a significant role to play in the execution of a sound national strategy and as a voice in U.S. engagement abroad. The new program is based on training by the U.S. Department of State Bureau of Energy Resources, which introduces Foreign Service Officers to the fundamentals of fuels, markets, challenges, and an overview of U.S. international energy policy.

Giving veterans a better understanding of today’s global energy security challenges is designed to inspire continued service to the country through careers in the energy industry, policy, and entrepreneurship. As the best and brightest exit the military service with years of hands-on experience and training, it is in the best interest of our national security to return that investment for implementation of technology that would provide flexibility to forces in the field, lessen our dependence on foreign fuels, and mitigate future conflicts resulting from climate change.

Dan Misch is a U.S. Naval Academy graduate and submarine veteran. He is a member of the Truman National Security Project Defense Council and was a 2016 Take Point Initiative fellow with the Atlantic Council of the US. Any opinions expressed in this article are the author’s own. The appearance of U.S. Department of Defense (DoD) visual information does not imply or constitute DoD endorsement.