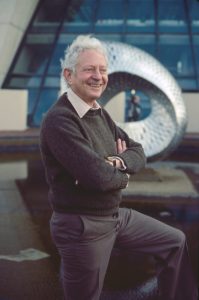 Leon Lederman stands outside Wilson Hall at Fermilab on the day he learned he was awarded the 1988 Nobel Prize.

Leon Lederman was one of a kind.

He was a brilliant physicist, winning the Nobel Prize in 1988 for the discovery of the muon neutrino. He was one of the founders and served as the second director of the U.S. Department of Energy’s Fermi National Accelerator Laboratory in Batavia. As a champion for science education, he helped start the Illinois Math and Science Academy (IMSA) in Aurora. As an educator himself, he spent decades teaching at the Illinois Institute of Technology, inspiring young minds to consider physics as a career.

He was also, according to the people who knew him, a character in the best sense of the word. Many of those people will be on hand on Wednesday, Sept. 25, at 6 p.m. for a special event celebrating Lederman’s life and legacy and looking forward to the future of particle physics. Presented by the Chicago Council on Science and Technology and Fermilab, in conjunction with the Chicago Public Library, the program will include presentations, a question-and-answer panel with physicists and a miniature physics slam featuring students from IMSA.

On hand to share stories and discuss Lederman’s life will be two scientists who worked closely with him, Rocky Kolb and Michael Turner of the University of Chicago, who started Fermilab’s astrophysics program under Lederman’s leadership. Fermilab Deputy Director Joe Lykken will give an overview of the laboratory’s work from Lederman’s era to the present and the future, and Fermilab scientists Kirsty Duffy, Jessica Esquivel and Don Lincoln will join Turner on the ask-a-physicist panel.

As a special treat, three IMSA students will join three Fermilab researchers in a physics slam, a fun competition that pits teams against one another to see which one can explain a scientific concept or principle in the most entertaining and informative way. The audience will then choose the winner. Fermilab hosts a physics slam every year as part of its Arts and Lecture Series, and it is one of the lab’s most popular events.

This event is free of charge and will be held in Pritzker Auditorium at the Harold Washington Library, 400 State Street, in Chicago. Registration is required for this event. For more information please visit the C2ST website.

Fermilab is America’s premier national laboratory for particle physics and accelerator research. A U.S. Department of Energy Office of Science laboratory, Fermilab is located near Chicago, Illinois, and operated under contract by the Fermi Research Alliance LLC. Visit Fermilab’s website at www.fnal.gov and follow us on Twitter at @Fermilab.

Chicago Council on Science and Technology (C2ST) is a not-for-profit organization that brings researchers, scientists and STEM professionals to you. Our goal is to reignite excitement and passion for science and technology and highlight their relevance in our lives. Visit our website, c2st.org, for a complete listing of our program offerings.

The DOE Office of Science is the single largest supporter of basic research in the physical sciences in the United States and is working to address some of the most pressing challenges of our time. For more information, please visit https://energy.gov/science.