As you may have seen during C2ST’s recent virtual event, Argonne National Laboratory just celebrated its 75th anniversary. The event commemorated the progress the foundation has made since its founding as a peaceful nuclear reaction research lab, to its current status as the first national laboratory in the United States. One of the agencies they have been working closely with is the U.S. Department of Energy on green energy innovations.

One of Argonne’s key goals is to reduce the effects of climate change on a global scale. Climate change (previously referred to as “Global Warming”) is defined as the change in natural weather conditions over a prolonged period. Some parts of climate change are naturally occurring, like the “Greenhouse Effect”. This effect occurs when the Sun emits rays called solar radiation which penetrate the Earth’s atmosphere and reach the Earth’s surface. Greenhouse gases (GHGs) are a group of gases in the atmosphere that insulate the heat so that the Earth’s surface isn’t freezing like Mars or Jupiter.

Other aspects of climate change are unnatural. Humans have created an excess of GHGs over time through the use of inefficient cars, the use of poor agricultural practices, the production of household and industrial energy, you name it! This has been going on for a long time and so the concentrations of GHGs in the atmosphere have increased significantly. All these extra GHGs keep more heat in, which is why we see global temperatures rising and why we experience irregular weather patterns. These climatic changes can cause roll-on effects like rising sea levels, more natural disasters, less rain, and other critical climate-related events. 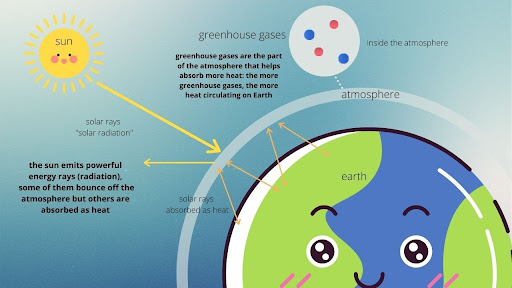 At Argonne, a team of researchers developed a digital simulation to help industries around the world monitor and prevent excess GHG emissions. The technology is called “The Greenhouse gases, Regulated Emissions, and Energy use in Technologies Model,” or “GREET Model” for short. GREET acts like a map, helping companies identify where inputs and outputs are to create an emissions profile for their technological processes.

The GREET model has helped identify innovations and practices in agriculture that could significantly reduce GHG emissions over the next 15 years. The team that developed the GREET model used it to evaluate many types of agricultural practices. Through these evaluations, they found three main technologies that are estimated to produce agricultural profits and reduce GHG emissions by 70%. The first is digital agriculture. Digital agriculture collects data from a bunch of different sites and helps to optimize the best timing and upkeep for different crop industries. The second is crop and microbial genetics. Essentially, this technology looks at the internal structure (genes) of our food and helps identify how to make them stronger against diseases or droughts. Finally, electrification refers to the use of more electric robotics or vehicles in agriculture so that fewer GHGs are released when harvesting crops.

Agriculture plays a huge role in our daily lives. It affects transportation, consumption, research, and many other industries. As researchers continue to discover how to make these industries more sustainable through technological advancements, we as consumers have a responsibility as well. Try to support any brands that you see making changes for climate change!