Scientists are ringing in the new year with transplanted pig organs. 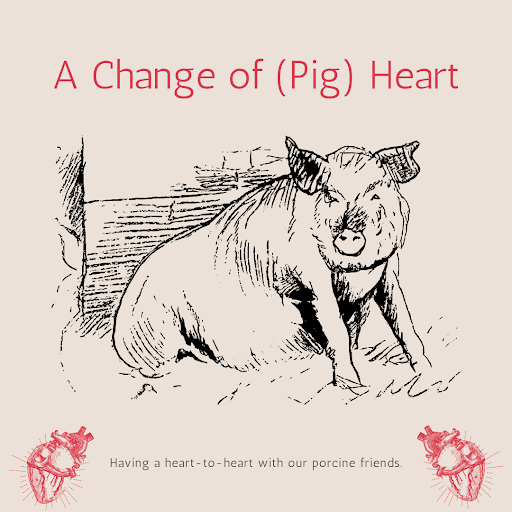 Why pigs? Pigs are promising candidates for human use. Pigs are easier to raise and have organs of comparable size and function to humans throughout their lives. For many years, pigs have been used in several ways to save human lives: 1) pig heart valves² are routinely transplanted into humans, 2) patients with diabetes have received pig pancreas cells³ to produce insulin, and 3) pig skins are used as temporary skin grafts for burn patients⁴. But recently, doctors are making medical breakthroughs with pig organ transplantations.

In the fall of 2021, doctors successfully placed pig kidneys⁵ into a 57-year-old patient, James Parsons from Alabama. He was critically injured in a motorcycle accident, rendering him brain-dead. Parsons’ family agreed to allow him to take part in a study at UAB Hospital and Legacy of Hope⁶, Alabama’s organ and tissue donation alliance.

Parsons’ kidneys were removed and replaced with two genetically modified pig kidneys. Once transplanted, the pig kidneys turned pink and were functional. The kidneys would have turned black if the organs were rejected. Within 23 minutes, the kidneys had filtered blood and started making urine. This outcome was considered a success by researchers. The next step in determining the viability of this process was to see how long these pig kidneys would last in living patients rather than brain-dead patients.

But how exactly was this scientific breakthrough even possible to begin with?

For starters, before any transplantation (human or animal), it is crucial to figure out whether the donor organ is compatible or incompatible with the recipient. Transplanted organs are rejected if they are not a good match (i.e., incompatible). To reduce the chances of organ rejection, scientists performed a crossmatch. A crossmatch is a blood test that mixes the blood from the donor and recipient. If it is not a good match, the recipient’s cells will attack the donor’s cells. This reaction means that the organ is not compatible with the recipient. On the other hand, if there is no reaction, the organ is compatible and can be transplanted into the patient.

Because our immune systems are adept at recognizing molecules as “non-self” or “foreign,” genetically modified pig organs have a better chance of being accepted into the recipient to prevent rejection. In order to increase the likelihood of acceptance by the host body, scientists use genetic tweaks to make pig organs a better match for humans.

The pig kidneys used in Parsons’ surgery were genetically modified with 10 key gene edits⁷. Four of these pig genes are disabled or “knocked out”. Of those four, three of them are responsible for producing antibodies that cause organ rejection (they produce pig molecules that our bodies would attack!), and one gene is knocked out to control growth hormones (we want to keep the pig organs human-sized).

Then, six human genes are added, or “knocked in,” to prevent organ rejection. These genes help to prevent blood clots, regulate blood vessel strength, and reduce inflammation. This genetic modification allows scientists to overcome the biological barriers between pigs and humans, making the pig organs more suitable for transplantation.

This method was used for the pig kidneys last year. This year, a genetically modified pig heart⁸ was successfully transplanted into 57-year-old Dave Bennett from Maryland. Bennett was relatively healthy his whole life but suddenly began having severe chest pain. He was eventually placed on cardiac support, but he was ineligible to receive a mechanical heart pump because of an irregular heartbeat (arrhythmia). He was also ineligible for a human heart transplant because he had missed medical appointments and not followed doctors’ orders (i.e., stopped taking his medications). As a last resort, Bennett turned to experimental surgery.

The surgery took nearly nine hours, during which doctors replaced his heart with one from a 1-year-old, 240-pound, genetically modified pig.

And the verdict of the surgery? Doctors consider it a success because the heart is pumping and the patient is recovering. Since Bennett’s health was deteriorating before the surgery (he was bedridden), it will take some time for his body to get back up to speed. Doctors are carefully monitoring his health on a day-to-day basis, but after more than 18-days post-surgery, doctors are optimistic about Bennett’s recovery.

Heart transplantation technology has come a long way since the first-ever recipient in 1967⁹.

This innovative technology could be the solution to the current organ donation shortage in the nation. Although the combination of 10 gene edits seems to have worked well in both Parsons’ and Bennett’s case, processes and techniques associated with this procedure may be refined and enhanced as scientists gather more data. Furthermore, the future of xenotransplantation may become even more “personalized” allowing scientists and doctors to tailor genetic edits on an organ-by-organ, patient-by-patient basis.