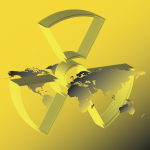 For more on the current issues in nuclear non-proliferation, you are invited to attend the talk by Ambassador Robert Gallucci, president of MacArthur Foundation, on May 25th at the Hughes Auditorium, Northwestern University.

Horizontal proliferation is when the same technology is spread across a geographical or ideological space. In the case of nuclear arms, it is the spread of nuclear technology around the world, either intentionally or not. US working with Britain and France which led to their development of the atomic bomb is an example of horizontal proliferation.

Early on, proliferation was view as a fantastic idea, as nuclear material was thought to have potential to cheaply produce electricity and power, and could revolutionize the world with neigh free energy. This idea was so powerful and intoxicating that to this day one can find those who believe cold fusion (room condition fusion of atoms) is a realistic goal. But beyond that, the large energy density of nuclear material gave hope that areas that had trouble with access to more traditional energy sources, especially developing countries would be able to produce all their needs from nuclear power at a fraction of the cost.

But that was not to be. With the detonation of nuclear weapons at Hiroshima and Nagasaki, WWII ended, and the discussion in the US turned to the future of atomic energy. Two camps develop quickly, with Robert Oppenheimer leading the argument for openness and collaboration with USSR and other countries in the world, and the Secretary of State Brynes leading the argument for preserving the “atomic competitive advantage”, and little collaboration with the Soviets. Oppenheimer had the foresight to acknowledge that the nuclear genie was out of its bottle, and that putting it back was going to be hard if not impossible. Despite rival optimism, he realized that in 5 to 10 years, USSR and other countries around the world will develop a nuclear weapon arsenal to rival the US, and despite the advantage, this race could only end in a stand-off between the two opposed sides. He was the first to publicly predict and explain the concept of nuclear terrorism in the US. He believed that any real security lay not in a competitive advantage, but collaboration and treaties, openness that engendered trust. He predicted that without that trust the world was at ever increasing risk of nuclear war, “a war without winners”.

And this debate was born out in a UN proposal that was to create a global International Atomic Development Authority to control the production, use and control of nuclear material, but tis plan was rejected by Stalin’s USSR. A minority in the UN, it was in fear of western powers’ ability to cull their development and access to nuclear technology, and vetoed the plan, de facto starting the arms race. The Soviets were able to test their first atomic weapon in record time, barely 4 years after the Trinity test in New Mexico, in August 1949. However, by this time, the US was already in possessions of 170 nuclear weapons.

Eisenhower and the “Atoms for Peace”

President Dwight Eisenhower delivered his famous “Atoms for Peace” speech in December, 1953. It started an official policy of proliferation of nuclear technology to less developed countries around the world. Some have called it a “nuclear carrot” to create and induce allies for the US in the Cold War. In practice, the US spread nuclear technology around to world, even to a few places that were doubtful as stable allies, such as Congo. Eisenhower’s programs did include an idea for an Uranium Bank, a facility that could monitor, control and review the distribution of atomic material across the world in order to ensure that it does not fall into the wrong hands. This idea was short lived, as the 50s saw discoveries of mineable uranium across the globe, where it was previously held as a scarce commodity.

In the field of nuclear weapons, the US was racing ahead to develop a large number of nuclear weapons and delivery systems, including nuclear-powered submarines. This race was driven in part to accomplish “first-strike” and “second strike” capabilities in order to quickly demolish an opposing nations ability to wage war.

In his 1961 speech before the UN, President Kennedy was the first American president to denounce nuclear weapons as a greater danger to society than they were a benefit to US security. At this point, the US had a stockpile of 22,000 nuclear weapons (compared to 2,400 for the USSR and 70 for Britain, as the only other nuclear powers in 1961).  And Kennedy recognized that a nuclear advantage meant nothing if a nuclear war destroyed the better part of the planet.  He realized that a nuclear disaster, a nuclear “Sword of Damocles” hung above every man, woman and child and could be triggered at any moment by “accident, miscalculation, or madness”. His thinking is ingrained in the development of the Nuclear Non-Proliferation Treaty.

In the early 60s, the development of Submarine Launched Ballistic Missiles made some of the conventional armaments wisdom outdated. While an enemy might use first strike to eliminate land-based launch sites and destroy a lot of the land-based military and civilian infrastructure, the ability to launch nuclear weapons from submarines assured that the other side could retaliate from mobile and neigh-undetectable platforms. This lack of security in armaments coupled with the security dilemma gave birth to the precarious balance called the principle of Mutually Assured Destruction, or MAD. Not country could launch a nuclear attack first without being assured of destruction in return.

Nixon and the NPT

The first major treaty to develop controls for and establish the handling of nuclear weapons, the Nuclear Non-Proliferation Treaty (NPT) was at the same time a major step forward in thinking about nuclear weapon stockpiles in the world. The treaty is considered to embody three principles, or pillars: 1) Nuclear Non-Proliferation; 2) Disarmament; 3) Peaceful use of nuclear energy. It divided the world into those who have nuclear arms and those who don’t. Those who had committed to non-proliferation of weapons and disarmament, and those who didn’t have them were guaranteed access to peaceful use of nuclear energy. The treaty lacked the timelines for disarmament, but it is notable that both US and USSR today have fewer stockpiles of operational weapons (weapons that could be launched in less than a day) than at the time of signing.

It is argued that the NPT did relatively little to hinder the US vertical proliferation (modernization of weapons) and USSR weapons development (rate of roughly 1,000 warheads a year), but it served to convince other countries to abandon nuclear programs (such as Sweden), and increase international costs for others. Arguably, this international accord, currently ratified or enforced by every country with the exception of Israel, Pakistan, India and North Korea (which withdrew in 2003).

The “Smiling Buddha”, an unexpected nuclear test done by India in May 1974, further tested the newly minted NPT. Despite espousing peaceful use of technology, the Indians were able to successful develop a nuclear device, but the program was soon abandoned. The program was abandoned afterwards until 1998, when the first deployable weapons are thought to have been created.

An interesting case of downward vertical proliferation in the US was Operation Plowshare, an attempt to find civilian uses for nuclear weapons. While originally consisting of a variety of projects, including artificial lake construction, mining and interstate road construction, the weapons were not used mostly due to local opposition. There were at least 3 detonations in Colorado, in an early attempt at shale oil extraction. The sites were underground, and remain radioactive to this day.

Reagan and bankrupting the USSR

By the start of the Reagan administration, the Cold War had entered its last phase. Years of emigrants (escapees?) from the USSR has painted a much less fearsome picture, and had given heart to the US that the Eastern Bloc could yet be broken. Unbeknownst to the Soviets, the US had been reducing the arsenal while maintaining or increasing the attach potential, mostly through technological advances like the Multiple Individual Reentry Vehicles (MIRVs). At the same time, the USSR continued its development of a massive stockpile to a point where it had over 3 times more bombs than all delivery methods (rockets, submarines, bombers) combined. Pressure from the US on both military and diplomatic fronts was designed to break the economic back of the Soviet Union, in hopes that that will facilitate its final collapse. Some contend that the strategy there was rather successful, if not fruitful during Reagan’s administration.

A singular moment in the history of Cold War, and arguably the beginning of the end of Cold War, was the Reykjavik Summit in 1986 at an old French Consulate. Presidents Reagan and Gorbachev met to discuss an arms reduction treaty, which Reagan attempting to include some human rights issues as well. Despite agreements made on reduction of strategic and tactical nuclear arms, the negotiations broke down over the implementation of the Strategic Defense Initiative (SDI) which would use satellites to track nuclear arms use, and deploy countermeasures. After the failure of the summit, the SDI initiative was popularly nicknamed “Star Wars”. However, a number of smaller treaties regarding nuclear weapons were nevertheless signed following the summit, even if the overall goal of disarmament had not been reached. Eventually, these efforts resulted in the signing of the Strategic Arms Reduction Treaty (START I) that codified gradual disarmament by US and USSR/Russia, during the first Bush administration.

Clinton and the former Soviet states

After the collapse of the USSR, the world suddenly found itself with a number of newly forged democracies that had nuclear weapons, but not the intention to use them or the funds to maintain them. Seizing the moment, the Clinton administration forged a plant to help former soviet states dismantle both their nuclear weapons and research reactors, both of which contained the Highly Enriched Uranium (HEU) that could be used to create atomic bombs. By this time, due to technological advances, the scientific knowledge in building a nuclear bomb had become such that with access to material, a few talented Ph.D. students in physics could construct a simple device. Thus the Clinton administration tasked the DOE with developing a program to secure this material, which continues to this day.

Currently, as of 2010, there are still over 22,000 nuclear weapons in the world, which is down from a peak of 69,000 in 1986. This belies the fact that our current weapons are far more modernized than they were 25 years ago, so they are both higher in yield and in efficiency of deployment. But it has been decreasing over time, and President Obama has supported further disarmament efforts with the new START treaty signed in April of 2010 with the USSR. If we disregard our recent history with India and North Korea, the US has been successful, if slow, in fulfilling the three pillars of the NPT treaty. The easiest way to prevent nuclear proliferation is to keep a close check on the material and spent fuel (both from reactors and weapons), and we have been successfully using a myriad of systems for several years to do this. But there are still too many weapons in the ex USSR that has not been adequately secured. And with US alone still maintaining 2,500 operation weapons, and over 450 intercontinental ballistic missiles (ICBMs) on high alert (deployable within 20 minutes), we are still far from a world safe from nuclear war.