Geological storage of carbon dioxide has the potential for significant reductions in greenhouse gas emissions.

While the fundamental scientific underpinnings of CO2 storage build on a century-long exploration of the physics of multiphase flow in porous media, there are aspects that remain unexplored and warrant further investigation. In this talk, Professor Benson will review recent experimental and theoretical research on multiphase flow of CO2 and brine in heterogeneous rocks, pore and continuum scale studies of the stability of residually trapped CO2, and monitoring of CO2 migration using pressure transient data. The implications of the findings from advances in CO2 storage science will be discussed for realworld projects.

Wednesday, March 22 3:15 to 4:30 pm, followed by light refreshments at 4:30 pm. The program will be held on the IIT campus in the Perlstein Hall Auditorium, room 131, 10 W. 33rd Street, Chicago. Overflow seating will be available in the Perlstein north-end lobby.

This program will be recorded, and available online following the lecture.

EVENT IS FREE AND OPEN TO THE PUBLIC 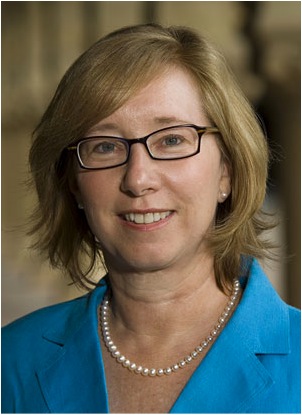 Benson joined Stanford University in 2007. She holds three appointments at Stanford: professor of energy resources engineering in the School of Earth, Energy & Environmental Sciences; co-director of the Precourt Institute for Energy, the campus-wide hub of energy research and education; and director of the Global Climate and Energy Project (GCEP), a pioneering university-industry partnership to develop innovative, low-carbon energy supplies to meet global energy needs.

Prior to coming to Stanford in 2007, Professor Benson was at Lawrence Berkeley National Laboratory, a leading research center supported by the U.S. Department of Energy and managed by the University of California. She held a variety of key positions during her 29-year tenure.

A groundwater hydrologist and reservoir engineer, Professor Benson is widely regarded as a leading authority on carbon capture and storage and emerging energy technologies. In 2012, she served as a convening lead author of the Global Energy Assessment (GEA), a multinational project coordinated by the International Institute for Applied Systems Analysis.

Professor Benson’s research interests include technologies for a low-carbon future and net energy analysis, a scientific method that weighs the energetic cost of energy production against the energy produced, with the goal of quantifying the overall energy efficiency of the production process.

Professor Benson also leads a research laboratory at Stanford that studies fundamental aspects of geologic carbon dioxide (CO2) sequestration in saline aquifers. In 2005, she served as a coordinating lead author of a special report on CO2 capture and storage published by the Intergovernmental Panel on Climate Change (IPCC). Professor Benson contributed to the reports of  the IPCC, which was awarded the Nobel Peace Prize in 2007.

The author of more than 160 scientific publications, Professor Benson is the co-founding editor of the journal, MRS Energy and Sustainability. Since 2006, she has delivered more than 200 invited talks on topics ranging from energy policy to carbon sequestration. She has also testified at U.S. Congressional hearings on climate change technology and CO2 sequestration.

Professor Benson received a B.S. in geology from Barnard College at Columbia University, and an M.S. and Ph.D. in materials science and mineral engineering from the University of California-Berkeley.