Since 2012 astronomer José Francisco Salgado has been photographing the Northern Lights from Canada, Alaska, and Iceland, as part of his work communicating science through the arts. So far, his Northern Lights films set to music have been presented with orchestras in 13 cities in four countries and have reached a combined audience of 130,000 people.

In this lecture, Dr. Salgado will speak about the physical processes behind the mesmerizing auroras and the experience of photographing them from subarctic Canada biannually. Just in time for the Holidays, you will get to experience the magic of the Northern Lights set to music while learning about the science behind these spectacular celestial displays–and what it takes to capture these awe-inspiring images. ‘Tis the season for science-inspired art! 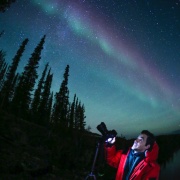 José Francisco Salgado is an Emmy-nominated astronomer (BS in Physics, Univ. of Puerto Rico; Ph.D. in Astronomy, Univ. of Michigan), experimental photographer, visual artist, and public speaker who creates multimedia works that communicate science in engaging ways. As the Executive Director and co-founder of KV 265, a non-profit science and arts education organization, Salgado collaborates with orchestras, composers, and musicians to present films that provoke curiosity and a sense of wonder about the Earth and the Universe.

His “Science & Symphony” films have been presented in 180 concerts and have reached a combined audience of more than 375,000 people in concert halls, museums, and lecture halls spanning more than 85 cities in 15 countries. Orchestras that have presented these works include the Chicago Symphony Orchestra, Boston Pops, the San Francisco Symphony, New World Symphony, and the Orchestra Teatro Regio Torino. His first two films were named by the International Astronomical Union and UNESCO as Special Projects for the International Year of Astronomy (IYA2009). In 2012 his film “Gustav Holst’s The Planets” was chosen for Ravinia Festival’s One Score, One Chicago initiative. In 2014, his collaboration with composer Christopher Theofanidis, “The Legend of the Northern Lights” was premiered with Grant Park Orchestra to critical acclaim in front of 32,000 people. In 2016, his short film “Carol of the Lights” was commissioned by Keith Lockhart and Boston Pops and presented 33 times to almost 75,000 people.

From 2006 until 2008 Salgado hosted “Nuestra Galaxia”, a weekly astronomy news segment on Univision Chicago (WGBO) for which he received an Emmy nomination. Salgado also produces and presents short science films with musician/composer Tom Bailey (from British pop group Thompson Twins) as part of the audiovisual ensemble Bailey-Salgado Project, and with harp duo Beyond Pluck.

As an experimental photographer, Salgado has visited more than 30 scientific sites in places including the South Pole, the Atacama desert, the French Pyrenees, and the South African Karoo and has contributed visuals to documentaries produced for the History, Discovery, BBC, and National Geographic channels. As a public speaker, he has given presentations about science and art in all seven continents, including a presentation at the Amundsen-Scott South Pole Station.

This program is presented in partnership with The Radler, who have generously allowed us the use of their facilities for free. Please consider supporting the restaurant by purchasing drinks and/or food while you are enjoying the program so that the partnership continues to be mutually beneficial. Thank you for your consideration!